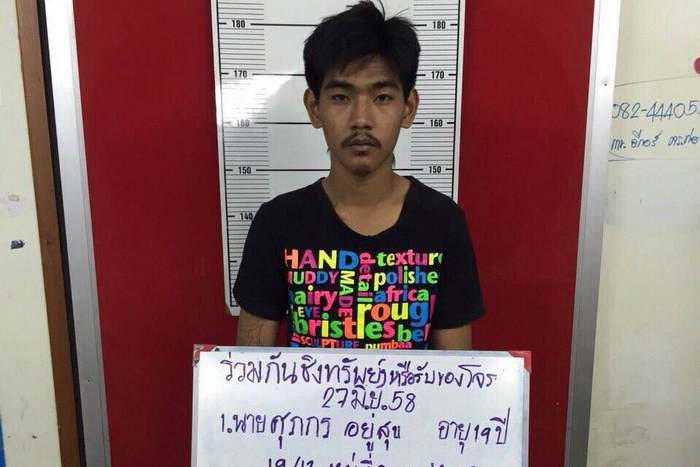 PHUKET: Police have arrested one of two suspects for a bag-snatch theft carried out on an American national in Rawai on Saturday.

Supakon Yoosuk, 19, was apprehended at his home in Rawai just hours after the crime, once police were able to identify him from CCTV footage off Soi Samakee, where the robbery took place.

“We received a call at about 1pm that two men on a motorbike had driven up next to the woman while she was walking down the road, hit her in the head and snatched her bag,” said Chalong Police Superintendent Noppadol Thiraprawat, who declined to name the victim.

“The two men escaped, but images of them were captured on CCTV.”

Col Noppadol told the Phuket Gazette that the victim said her bag had contained 3,000 baht in cash, a credit card and an iPhone 5.

“Mr Supakon admitted to the crime, but told police that his accomplice has the bag and the stolen items,” said Col Noppadol.

“We are withholding the accomplice’s name until we make the arrest. We believe we will find him soon.”

Mr Supakon was charged with theft.