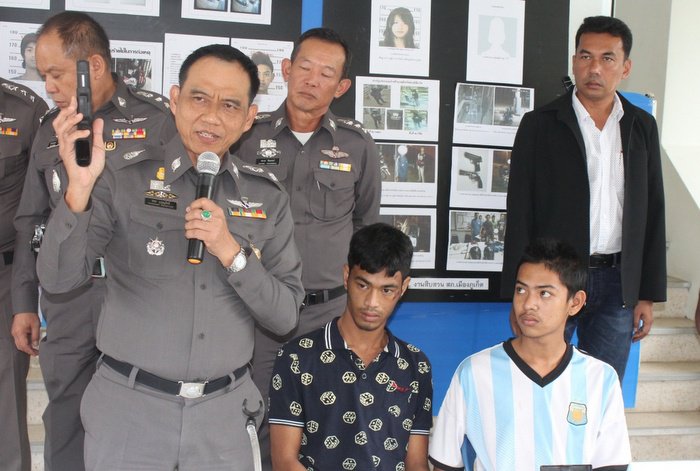 PHUKET: Police have arrested the gunman who shot and killed a man in the Chalong Pier parking lot on Friday.

Kanawat Thingwai, 21, and his two accomplices, 18-year-old Ekkasit Kongsomot and a 17-year-old minor named by police only as ‘Don’, were arrested yesterday at a house in Rawai, Provincial Police Commander Patchara Boonyasit said this morning.

The three men drove up on a single motorbike, shot and killed Illyas Malee, 28, and left Humdee Jeklek, 18, in critical condition with gunshot wounds to his shoulder and leg (story here).

Police were able to track the trio back to their house based on CCTV footage in the area.

At the house, officers seized a 9mm handgun, 18 rounds of 9mm ammunition, one firearm magazine, one round of ammunition for a 4.5mm firearm, a gun case and drug paraphernalia.

“Mr Kanawat confessed that he was the gunman, while the others were only accomplices,” said Maj Gen Patchara. “He was angry about the two men making ‘annoying noises at them’ when they drove by on their bike. He said he had originally only intended to threaten them.”

“All three have confessed to the charges,” Maj Gen Patchara said.