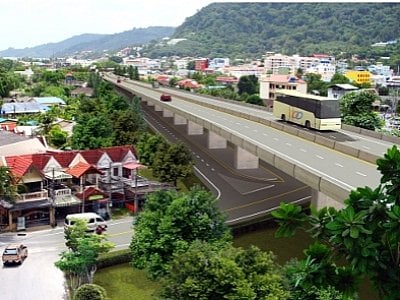 The proposed route would start from Soi Bang Thong on Phra Barami Rd near the Go-Kart Speedway in Kathu, tunnel through the hills and connect with Phang Muang Sai Kor Rd in Patong, explained Anurak Srisawaeng, one of the study panel members.

Mr Anurak explained to a public meeting yesterday that the total length of the proposed route is 3.07 kilometers.

“The route from Kathu will start with a four-lane, ground-level road about 625 meters long.

“The road will lead to twin tunnels, about 1,600 meters long, through the Nakkerd Hills,” he said.

“At the end of the tunnels, the route will continue on a 504m elevated road which will become a six-lane road connecting to Phang Muang Sai Kor Road,” Mr Anurak explained.

Study project manager Pongchanit Chuwiruch said that public opinion will be taken into consideration, but the final decision will ultimately belong to the Ministry of Transport.

“Generally, projects do not need to have 100 per cent agreement [by all stakeholders] in order for construction to be approved,” he said.

“But we definitely have to listen to the people who oppose the project too, and thus find suitable measures for them,” he added.

One earlier concern had been safety and the need for evacuation routes, a contingency now addressed with the tunnels showing exit passages for people trapped inside.

However, several local residents repeated their concern over receiving inadequate compensation for land needed for the project.

Regardless, Mr Pongchanit said, “If everything goes well, without opposition or obstacles, the tunnel could be completed within six years.”

Double victories for Team Premier and Voodoo at Phuket’s Raceweek