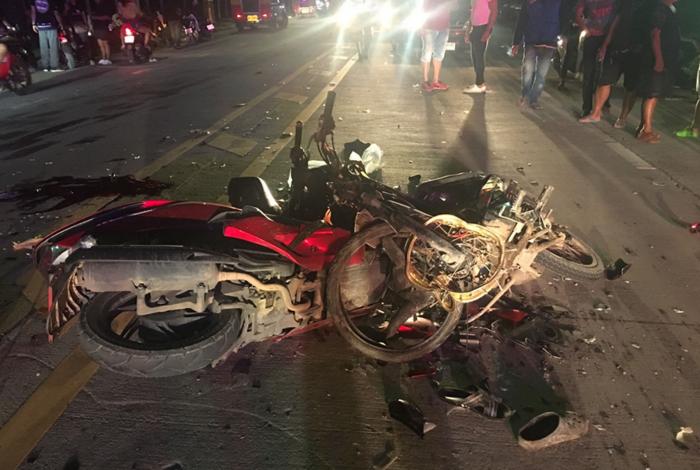 PHUKET: A French national and an unidentified man were killed in a collision between two motorbikes in Patong early Sunday morning. A third man, a Myanmar national, is in Intensive Care Unit (ICU) after the smash.

All three victims were taken to Patong Hospital, where two of them were pronounced dead. The French national, named Arnaud Sacha Leclere, 33, worked as the director at Pink Paradise Phuket on Bangla Road.

An early morning Facebook post by ‘Pink Paradise Phuket’ notified the public of his demise. “Today we have lost our Director, our Brother, our Best Friend. R.I.P Arnaud we will always love you,” the post read.

The crash occurred in front of the Fong Beer pub on Phra Metta Road around 2:40am.

“Three people were injured and unconscious when we arrived at the scene,” said Maj Pathapee Srichai of Patong Police. “Two motorcycles, that were apparently being driven in opposite directions, also lay smashed up on the road.”

“The sole survivor of the incident has been identified as 23-year-old Win Soe Tai, who we believe to be from Myanmar,” confirmed Maj Pathapee. “He was transferred to the ICU in Vachira Phuket Hospital. We are waiting for him to regain consciousness so we can question him about the incident.”