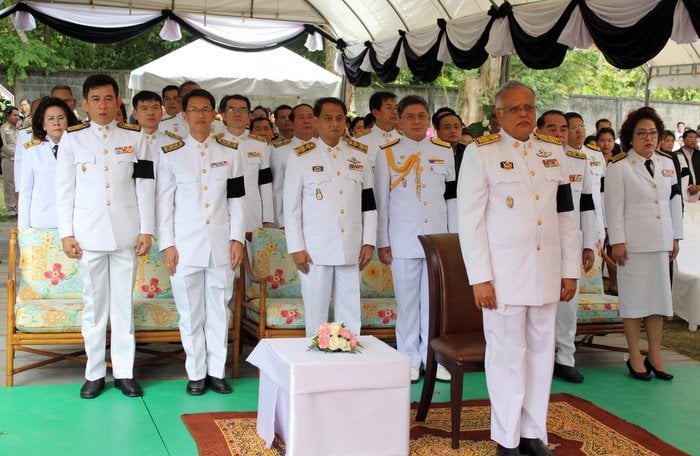 PHUKET: Thousands of people turned out to mourn the death of former Phuket senator and suspended Phuket Provincial Administration Organization (PPAO) President Paiboon Upatising as he was laid to rest at a Catholic graveyard in Phuket Town yesterday.

Adviser to the Minister of Interior Siwa Sangmanee attended the funeral as the guest of honor and headed the ceremony of putting ‘Din Praratchataan’, funeral soil given by the Bureau of the Royal Household, on the grave. Also attending the royal ceremony were Phuket Governor Nisit Jansomwong and other high-ranking Phuket officials.

The well-established politician, dubbed Phuket’s ‘Pink Panther’ due to his use of pink to brand his public projects following his election as the PPAO president in 2008, lost his battle against colon cancer at 1:09am on August 2 at Bangkok’s Thonburi Hospital (story here).

His body was brought to Phuket, where numerous Phuket officials visited his home to pay their respects. The seven-day ceremony in honor of Mr Paiboon began at 2pm last Monday (story here).

Mr Paiboon’s accomplishments were listed at the burial ceremony by his eldest son Maetapong Upatising, who was with him when he passed away (story here).