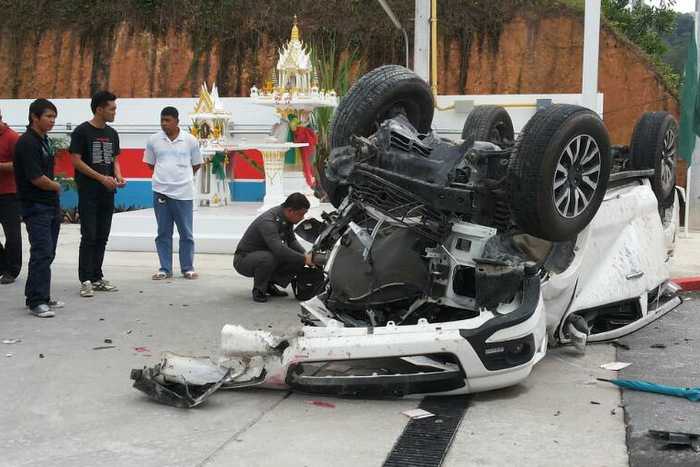 PHUKET: Excessive speed is believed to have been the cause of a dramatic single-vehicle crash near a gas station on the Airport Road on Friday.

A four-door pick-up truck was seen to lose control and crash into a ditch, ending upside down. The passenger, Thawatchai Sermrat, 31, was thrown clear and died at the scene, while the driver, Leng Jampathong, 53, is in critical condition at Vachira Phuket Hospital.

“Mr Leng has no cuts or abrasions on his body but we believe might have suffered internal injuries,” said Lt Thanom Thongpan of the Tah Chat Chai Police.

“He was taken to Thalang Hospital and then transferred to Vachira Hospital for better treatment, but has not regained consciousness.”

Witnesses told police that the pickup truck was heading toward Thepkasasattri Road.

“I was told that it was travelling at high speed and that the driver lost control. We believe that Mr Thawatchai was ejected from the truck because he was not wearing his seat belt,” Lt Thanom told the Phuket Gazette.

Police warned motorists once again do not to drink and drive.

“The New Year is coming and people are bound to celebrate the occasion,” said Lt Thanom.

“Drinking plays a big part of the festivities but I would like to urge people ahead of time that if you drink please make sure you do not drive.”