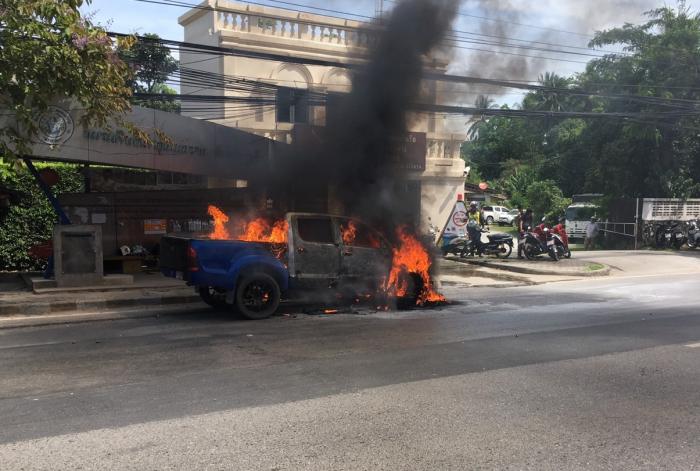 The vehicle was burnt to a crisp with an estimated 600,000 baht in losses incurred. The driver of the vehicle escaped unharmed mere moments before the flames erupted.

“The blue Toyota Vigo belonged to 34-year-old Wichai Buasri, who was on his way to Phuket Town from Pa Khlok,” said Sen Sgt Maj Suthee Maneesing of Thalang Police. “After passing by Heroines’ Monument he saw smoke coming from under the hood. He parked it on the roadside and exited the vehicle. Two explosions were followed by fire at about 11am.”

“Luckily, Mr Wichai managed to stop in time and right in front of the Tha Rue police box. Officers at the box called in Thalang Police and Srisoonthorn firefighters, who closed off the side lanes to prevent damage to others nearby and extinguished the fire within 30 minutes.

Police have yet to figure out the cause of the fire, but believe it was either a short circuit or a leak in the engine. The pickup is being investigated.

Samkong Underpass to be closed for opening ceremony