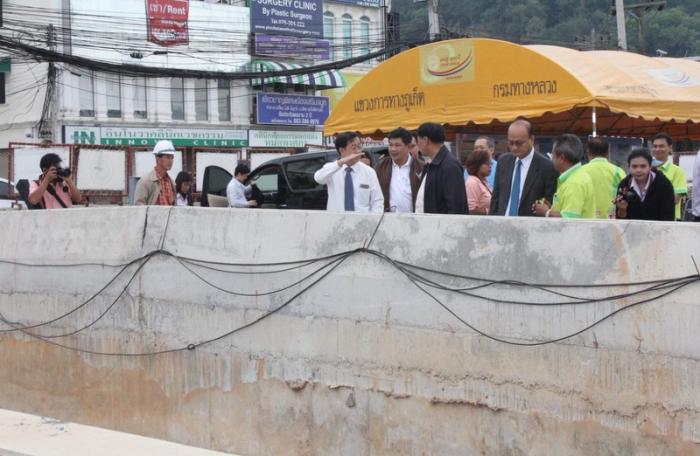 PHUKET: For the second time since its completion on October 31, the Samkong Underpass will be shut off to the public – this time from 10pm tonight to midday tomorrow for an official grand opening ceremony to be held on-site.

The ceremony is scheduled for 7am-9am tomorrow, with Phuket Governor Chokchai Dejamornthan and Highways Department Chief Construction Engineer Parinya Sangsuwan among the list of chief guests.

The celebrations will feature both Islamic and Buddhist religious rites, as well as a big bike parade as part of the grand opening.

“We would like to request people to avoid using the underpass during this time. We will also have trucks around the area announcing the closure,” said Chalermpol Wongkiattikun, project engineer from the Department of Highways.

Last month, the underpass was closed overnight for the installation of a six-meter-long sign board adorned with its name (story here).

Starting from January 22 this year, the underpass construction company Wiwat Construction Co Ltd was fined 2 million baht per day until the project was completed (story here).

The completion was delayed several times since the northbound lane was first opened in April and promised to be fully operational by May (story here and here).

Despite site visits from Transport Minister Arkhom Termpittayapaisith and inspectors from the Ombudsman Office in Bangkok to push for urgent completion, the project deadline was pushed to June, then July, August and September (story here and here), before it was officially completed less than two months ago.

One dead, another injured in gruesome Phuket collision

Pick-up truck burnt to a crisp in Phuket