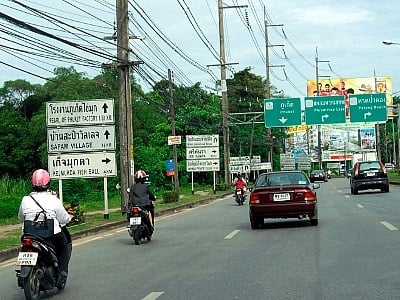 Sathaporn Sornchana, Deputy General Manager of the Phuket Highways Office, announced the news at the second meeting of Phuket Governor Tri Augkaradacha’s advisory committee, which the governor formed in May to start tackling such issues.

The move follows Surin Bamrungphol denouncing signs installed along main roads under the responsibility of the Phuket Highways Office as ugly and dangerous.

At the 18-member committee’s previous meeting on July 7, he singled out Thepkrasattri Road as one particular eyesore.

“Some block views. Some block traffic lanes. Some are installed near historical monuments, making them look bad. Some have incorrect spelling in English. Some are not even installed safely.”

Mr Sathaporn told the meeting yesterday that many of the small offending signs installed without his office’s permission had already been removed.

However, billboards posted on large steel frames will take a little longer to pull down, Mr Sathaporn said.

“We cannot immediately remove the large billboards with steel structures because we need to warn the owners in writing three times before we can legally remove them,” Mr Sathaporn said.

Part of the problem was that although the structures were on public land, many of the owners were paying taxes to local tambon administration organizations (OrBorTor) for the right to use the billboards, he explained.

“We are now asking for cooperation from the local OrBorTor to inform the boards’ owners to remove any signs in public areas,” he said.

Only signs approved and installed by the Highways Office will be allowed beside the main roads, Mr Sathaporn added.

“The signs must measure 75cm by 120cm. The plate must be made from aluminum alloy and have a white background,” he said.

“Anyone who does not ask our office for permission to install a sign must post their sign at least 2.5 meters away from the edge of the road because the land beside the road is for public use, not for personal use,” he added.

Governor Tri was plainly happy with the progress made.

“I am quite pleased with the progress. Keep going. Phuket should have as many clear views as possible,” he said.

“For any cases that you have problems with, I will talk with the local OrBorTor [involved] to make sure you have their cooperation,” Gov Tri added.