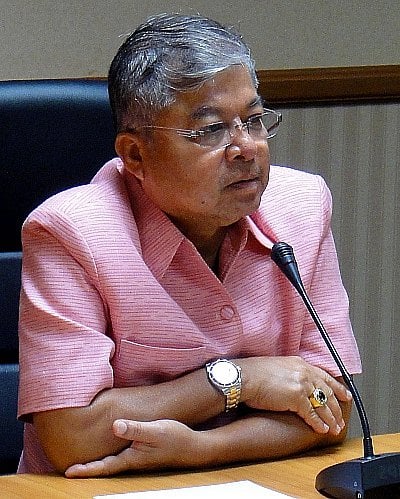 “The new car park will be ready to use by this coming high season,” Ms Dungchai told a meeting chaired by Phuket Vice Governor Weerawat Janpen.

The new car park, located in front of the airport cargo buildings just to the south of the main terminal, will accommodate 300 cars, she added.

“We have to confer with AoT [Airports of Thailand] headquarters in Bangkok to confirm any parking fees to be charged and how the car park is to be managed. I believe we will receive a formal reply within one month,” she said.

Airline staff and people working at the airport who often have to park there long term have been consulted.

“They suggested that we install covered footpaths to prevent people using the car park from getting wet when they walk to the main terminal, because it has been raining a lot lately,” Ms Duangchai added.

Vice Governor Weerawat suggested that rates cheaper than those currently charged at the main car park be levied to encourage more people to use the new car park.

“You could even offer free parking in the beginning just to get people to start using it,” he said.

V/Gov Weerawat also raised the problem of low-hanging power cables at the site.

“The airport and the PPEA [Phuket Provincial Electricity Authority] need to get together and see what you can do about this mess,” he said.

Another improvement would be to clearly mark the entrance to the airport.

“I drive past the entrance nearly every time I come here. Would you please consider making it clearer to see,” he said.