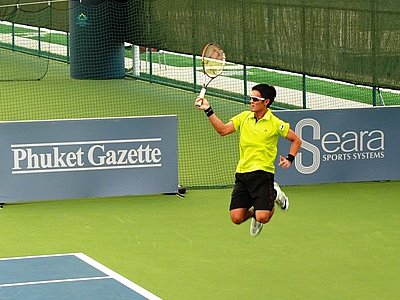 Other singles results went with form, but disappointment for Thailand came when their young star, Kittiphong Wachiramanowong, lost to number five seed Zhe Li from China, 4-6, 6-4, 6-0.

Christopher Rungkat of Indonesia, who is seeded six, defeated another Thai player, Perakiat Siriluethaiwattana, 6-4, 6-1 to advance.

Number four seed Laurent Rochette of France put paid to Jeson Petrambon’s participation in the competition with a 6-4, 6-4 win over the Philippines player.

Rohan Gajjar of India progressed at the expense of Italian Marc Reyes, 6-2, 6-2.

In the final singles match of the morning, number one seed Danai Udomchoke eased into the next round defeating Abhijeet Tiwari of India, 6-2, 6-1.

After noon, Mick Lescure of France lost to Richard Becker of Germany (no relation to the great Boris Becker) 6-4, 6-4.

And in the last singles match to finish, Jannick Yankovits nudged victory over Bumpei Sato by a score of 6-4, 7-5.

Thailand had four doubles teams in the tournament going into yesterday, but the draw and an unfortunate loss would only see two teams progress.

Korean pair Cho and Ji Sung Nam ended the hopes of the fourth Thai team, Kiratai Siributwong and Perakiat, advancing on a 6-3, 2-6 (10-8) score.

In the final doubles match of the day, Victor Baluda of Russia and Jimmy Wang of Taipei shocked the number four seeds Gajjar and Rungkat beating them 7-5, 6-1.

Pick up a copy of the Gazette today for a full report on the tournament at TSLC, or visit thanyapura.com

Thailand U23s all at SEA against FC Phuket