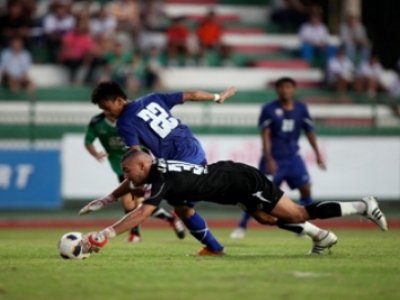 PHUKET: Thailand’s U23 team played their final pre-SEA Games warm up match at Surakul Stadium last night and went out on a low, losing 2-1 to a determined FC Phuket side.

Despite the national team dominating possession in the first half and peppering Phuket’s Jonathan Matijas with attempts at goal, it was the local boys who took a one goal advantage into the half time break with a header on 40 minutes from Tameezee Hayeyusoh, who latched on to a free-kick from Niran Phunthong.

Phuket doubled their lead 10 minutes into the second half when Niran was brought down in Thailand’s penalty area and Pongsak Panicharoen dispatched the resulting spot kick.

Carlo Coppari from Italy, a potential new signing for Phuket, entered the fray late in the second half, but couldn’t get on the score sheet.

However, against the run of play, a penalty was awarded to Thailand which was dutifully scored by their captain Ronnachai Rungsiyo.

The Thailand squad returns to Bangkok today to prepare for their departure to Jakarta next week.