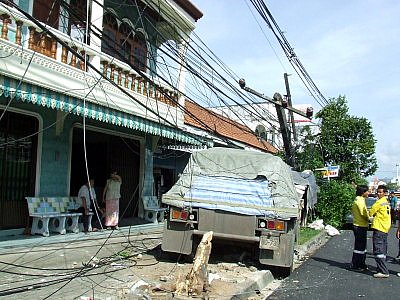 PHUKET: A tractor-trailer driver overshot a U-turn on Phuket’s Thepkrasattri Road this morning, crashing into several shops, vehicles and a telephone pole, causing an electricity blackout and effectively shutting down the island’s TOT phone service from the rest of the country.

A Kusoldharm Rescue Foundation worker told the Phuket Gazette that the driver of the truck, which was loaded with bags of cement mix, left the Shell gas station in Baan Sapam at about 9am.

The driver was making a u-turn into the northbound lanes when his truck struck three cars, a van and a motorbike before snapping a telephone pole and coming to a stop.

The truck also destroyed an awning, a sign and a marble table set belonging to shops along the footpath.

The driver suffered minor injuries and is now at Vachira Phuket Hospital for treatment. He will go to Phuket City Police station for questioning upon his release, the rescue worker said.

The driver struck the utility pole with enough force to cause electricity outages and disrupt TOT telephone services.

An officer at TOT told the Gazette that phone lines were cut along Thepkrasattri Road from Phuket Town to Phang Nga, and along the bypass road.

“I’m not sure when the repairs will be finished, but it will probably take the whole day,” he said.

An officer with the Phuket Provincial Electricity Authority said, “Power will be out in some areas along Thepkrasattri road until we can reset the pole and wires – it may take a day.”

Phuket butterflies to take wings in the wild