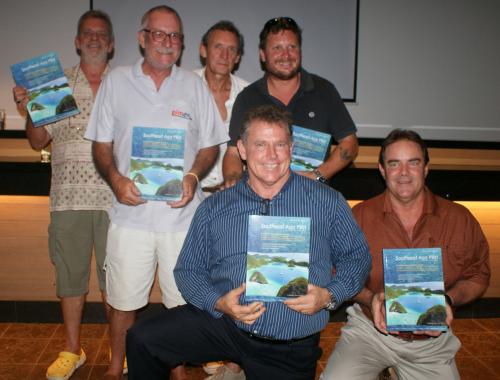 PHUKET: A gathering of Phuket’s elite captains and core sailors of the local yachting community last night marked 24 years of dodging rocks with the launch of the fourth edition of the essential cruising guide, Southeast Asia Pilot, that made it possible.

The latest edition covers the area from the Andaman Islands in Indian territorial waters to Darwin, Australia. In total, the guide offers 244 pages featuring 533 cruising locations with charts and illustrated recommended anchorages in each locale.

The sections for Thailand, Malaysia, Myanmar, Vietnam, Hong Kong, the Andamans and Singapore have been overhauled and updated, Pilot co-founder Bill O’Leary explained to the gathering at Royal Phuket Marina.

“New chapters for the Philippines, with a whole new section focusing on Palawan, as well as Indonesia, including Raja Ampat, and Palau in Micronesia are now included,” he said.

The tome, priced at 1,800 baht, includes hundreds of detailed new charts with GPS anchorage positions, stunning photos of the locales and the latest cruising information for popular sites.

Explaining the inspiration for the first edition of the Pilot that surfaced in 1989, Mr O’Leary recounted a conversation with fellow Pilot founder Andy Dowden during which the unforgettable – but all too common – question was asked: “Did you hit that rock, too?”

Thus the Pilot was born, mainly as a guide for local captains and visiting yachtsmen taking Sunsail charters from Phuket.

Since then, the guide has grown to include expanded coverage of cruising grounds in the area, changed its name to the Andaman Sea Pilot, and been expanded again, becoming the Southeast Asia Pilot that it is today.

Special thanks went to Grenville Fordham for his exquisite skills in recreating the charts and other maps critical for the safe navigation of Asia’s key boating grounds.

“As a quintessential guide, the Southeast Asia Pilot is probably the most stolen book among a seafaring captain’s possessions,” Mr O’Leary said, jokingly, holding up the copy that is kept literally padlocked at the Ao Chalong Yacht Club (ACYC).

Mr O’Leary did not elaborate how the book came to be in his possession, but quickly handed it back to long-term ACYC member Bob Mott.

The book is available at the office of Image Asia Events, at Asia Marine, Simpson Marine and Lee Marine offices and other outlets in Chalong.

For more details about the Southeast Asia Pilot, including the downloadable format, visit SoutheastAsiaPilot.com