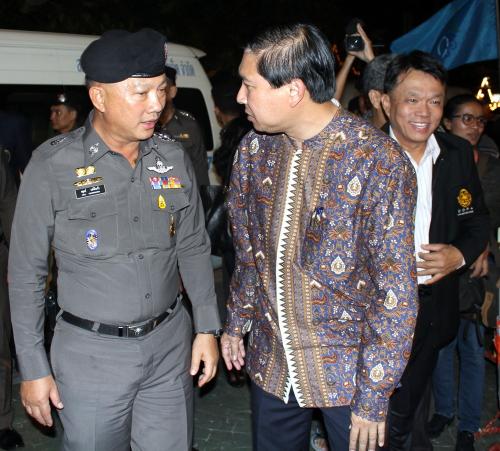 PHUKET: The two highest-ranking police officers in Thailand joined Phuket’s top cop in Patong yesterday evening in the latest campaign to safeguard tourism revenue by convincing tourists that Phuket is a safe place to vacation.

Over 400 police officers gleaned from every station in Phuket gathered in formation at one end of Soi Bangla to be reviewed by the Royal Thai Police Commissioner Adul Saengsingkaew.

“The Thai Government wants to increase tourist confidence by ensuring that Phuket is a safe place to visit,” Gen Adul said.

The last time police turned up in mass formation was about a month ago, when 300 officers gathered in the same location during a similar push to bolster tourist confidence (story here).

Phuket is among the top five tourist destinations in Thailand, and along with Bangkok, Chiang Mai, Pattaya and Samui, is expected to produce two trillion baht from tourism by 2015, Gen Adul said.

“It is the duty of the police to eliminate crime and maintain tourists’ confidence in public safety.

“I came down to Phuket this time to check up on police activities – to find out what the current problems are and lend a hand in solving them,” he said.

After the officers were dismissed, Gen Adul led a group of officials down Soi Bangla, greeting tourists and reassuring them firsthand that Phuket is a safe place to vacation.