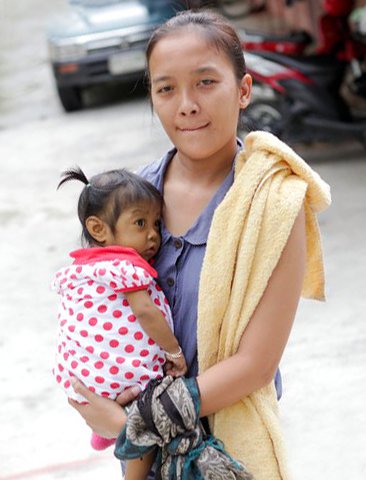 PHUKET: Eight-month-old Tuptim Jadngooluem has been given a second chance at life after she successfully underwent surgery at Ramathibodi Hospital in Bangkok yesterday.

Tuptim, who was diagnosed at three months with a terminal liver condition known as biliary obstruction, has spent over a month in hospital awaiting a parental donor liver transplant to save her life.

After 18-hours of surgery involving mother and daughter, both are today recovering in Ramathibodi Hospital and are said to be doing well.

Tuptim remains in stable condition in the intensive care unit (ICU), where she will remain for several weeks, while Mrs Nit is doing fine and is expected to be released within days.
“Both mother and baby are good and the operation was a success,” said Grainne Farrell, who headed up the fund-raising campaign to save Tuptim.

“The doctor said it couldn’t have gone any better. Tuptim will have to stay in ICU for several weeks, but Mrs Nit is in a normal hospital bed and could be out of hospital within the week.

“It is brilliant news and let’s hope there will be no complications in the coming days and weeks,” she added.

One man who will be overjoyed by the operation’s success will be Tuptim’s father, Rattanachai “Kru Nai”. The well-known trainer at Tiger Muay Thai in Chalong has been by his daughter’s bedside in Bangkok since mid-December.

Last month Tuptim’s parents were facing the prospect of their only daughter dying as they could not afford the 1.5 million baht needed to pay for the operation.

However, the tireless fund-raising by members of Tiger Muay Thai, added to a US$50,000 donation from Ultimate Fighting Championship (UFC) President Dana White, meant Tuptim finally got her life-saving operation.

An exact date for Tuptim’s return home to Chalong is not yet known, but it will be posted here on the Phuket Gazette website once it has been confirmed.