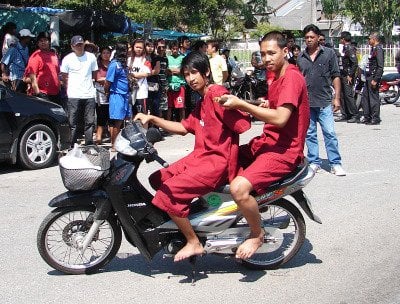 Phitakpong Chaetaphai and Namchok Saetan, both 19, were taken by police this morning to re-enact the events that led to security guard Winai Buathongkham being killed by a single bullet to the head.

Police said that Phitakpong was arrested in his hometown of Nakhon Sri Thammarat, while Namchok was captured here in Phuket, his home province.

The duo are not new to crime and punishment, as both have a history of arrests on drug and robbery charges, police said.

According to police, on the night of the murder the two youths drove a motorbike past a new government workers’ housing complex near Saphan Hin when they spotted three “enemies”.

Namchok, riding pillion, allegedly pulled out a home-made (thai pradit) gun and fired shots at the three with intent to kill.

Instead of reaching their intended targets, one of the bullets hit Mr Winai in the head, police said.

Residents of the housing complex said that on the night of the murder they saw Mr Winai “standing his ground” against a barrage of insults from a “gang of youths”.

However, according to police, the alleged killers said that the bullet “accidentally went straight to the booth where Mr Winai was sleeping”.

Police said that after the re-enactment, the pair would be taken to Phuket City Police Station and charged with murder.