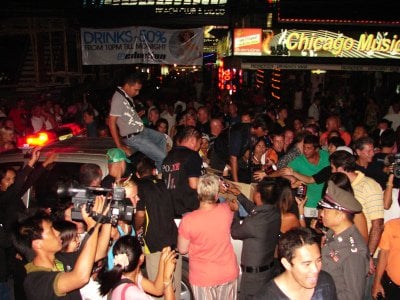 PHUKET: Tourists and workers along Soi Bangla last night pushed and shoved to get their hands on the latest craze: DEA ‘Most Wanted’ souvenirs.

The free handout was held from 10 to 11pm, with hundreds of people scrambling to get beer coolers, T-shirts, pens, match boxes and computer mouse pads emblazoned with images of the US Drug Enforcement Administration’s most wanted criminals.

The campaign was a collaboration among the US DEA, the Thai Narcotics Suppression Bureau, Provincial Police Region 8, the Phuket Provincial Police, the Royal Thai Navy Third Naval Area Command and Patong Municipality.

Before the mass giveaway took place, chiefs of the collaborating agencies held a meeting at the Phuket Graceland Resort & Spa to explain to fellow officers and about 300 Patong residents the aim of the campaign.

DEA Thailand Director Joseph Reagen said “It is a part of a multi-city effort. We have done this in Chiang Rai, Pattaya, Soi Nana in Bangkok and now in Phuket.

“We have received clues through this form of cooperation before, and we believe we will get more from here. People in the community and people violating the law need to report this.”

In Phuket during the same period 3,443 people were arrested for drugs, with about 900 more arrests since last October, he added.

The number included 81 people arrested during a police blitz on drugs from January 8-19, 39 of whom were presented at a press conference at Phuket Provincial Police headquarters this morning.

“Prime Minister Abhisit Vejjajiva has ordered police to especially crack down on drugs for three more months… I am very happy with the number of arrests so far, but I do worry that just making more arrests will not help to eliminate drugs,” said Commissioner Kokiat.

“Drugs are everywhere now. Every piece of information and every clue is important in tracing the drugs back to their source. So if you know anything about these ‘most wanted’ or any other people involved with drugs, inform us as soon as possible,” he added.

Meanwhile, the items handed out last night are now collector’s items. No more will be handed until further notice, the Gazette was told.