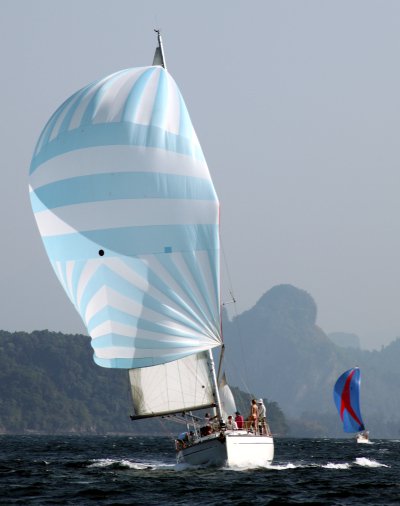 PHUKET: Testing weather and clever course design allowed this year’s Bay Regatta to be hailed as one of the best, with Scott Duncanson and his crew on Quantum Fusion M taking top honors in the Racing class.

It was not plain sailing for Ducanson, however. He managed to scramble the last of his crew together only on registration day.

Racing class rival First, skippered by Andrey Arbuzov, had the chance to take top honors in the class, but a late start on Sunday handed the advantage to Quantum and kept First in second place.

Cruising A class was won by Neils Degenkolw on Phoenix, with Mick Kealy’s Minx in second place followed by Jean Rheault’s Souay 1.

Ao Chalong Yacht Club (ACYC) was the proud host of the event, while the race management team under the direction of Simon James and Andy Dowden proved their worth in difficult conditions.

The “Fun Regatta” of four days of racing around Phang Nga Bay brings together keen racers and less-competitive sailors to enjoy and discuss their chosen sport.

Racing stalwart Kevin Perrins, skipper and owner of Rusalka (fourth overall in Cruising B class) had no reservations. “This has been the best Bay Regatta ever,” he said.

Steven Gear-Evans agreed. “This was the most stunning race course we’ve ever been on. We’ll definitely be back,” he said.

Venues including The Village Coconut Island, The Paradise Koh Yao Boutique Resort and Spa, the Sheraton Krabi Resort and of course ACYC provided top entertainment and a moveable feast for over 300 people.

The Village Coconut Island was a new venue for the regatta and two of the five party nights were held there. The venue was convenient for Phuket locals, and with Day 1 of sailing held in that area, it gave an opportunity for a greater number to participate.

The event was sponsored by the Phuket Gazette and PGTV.

Phuket Memorial for Tony Knight to be held Saturday