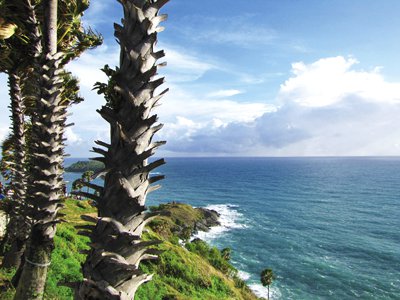 PHUKET: British TV personality Phillip Schofield revealed in a recent Daily Telegraph interview that he thinks Phuket – in particular Promthep Cape – has been ruined by tourism.

Recounting a recent trip to Promthep Cape with his wife, Schofield told the newspaper he was shocked by how much the place had changed for the worse since he visited in his youth.

Schofield said he remembered the Cape as a magical place where local families would bring food and everyone was invited to share, but now “nasty shacks selling awful food” and the “worst kind of commercialism” has destroyed the popular sunset viewing point.

Promthep Cape (Laem Promthep, in Thai) is located on Phuket’s southernmost tip and remains one of the island’s top tourist attractions, although packaged tourists have far outweighed private individual travellers at the Cape in recent years.

In addition to its natural beauty the Cape hosts a shrine, a lighthouse and a museum, and an oversupply of food stalls and trinket shops.

In a recent round of interviews, the Phuket Gazette tried to get some opinions on the Cape, and on Phuket generally, from people in a position to speak about it.

Responding to Schofield’s comments, the head of the Tourism Authority of Thailand’s (TAT’s) Phuket office, Bangornrat Shinaprayoon, said that “People don’t have the same tastes. Mr Schofield probably prefers local lifestyles. Times have changed and everything has changed with it.

“He can choose other spots in Phuket to go to, such as Nai Yang Beach which is still full of local smells and abundant nature. That might suit him better.”

However, many tourists and locals in Phuket agree with Mr Schofield’s comments.

Nuanjan Gedgliang, 44, has been running a clothes stall at Phromthep Cape for 18 years.

“Not many people bring food up to eat at Promthep anymore, ever since Rawai Municipality campaigned against it after some tourists complained that the Cape was dirty,” Mrs Nuanjan said.

Mrs Nuanjan also said that the area had definitely changed and become too commercialized – a transformation driven by tourism.

She added that Phuket has turned into a “foreigner’s city”, where everything has become expensive.

“I really would love for it to go back to what it used to be, but that seems impossible. If my house were not in Phuket, I would not live here,” she added.

“Promthep Cape is not like it was eight years ago. At that time there were not so many businesses – and only small food stalls,” he said. He emphasized that the pace of development of Phuket would eventually hurt tourism, as the island would no longer have a local influence, which would be off-putting to tourists.

Many other tourists and local residents, Thai and foreign, were found to share Mr Nilsson’s observations.

Mrs Bangornrat noted that there are some positives to take from their comments. Better organization in terms of appearance at many of the island’s tourist attractions was one issue she highlighted as needing redress immediately.

“We want tourists to be impressed, not put off…,” she added.

Phuket tourist trapped in a gutter