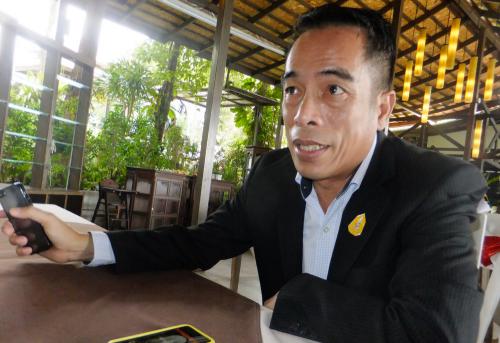 PHUKET: Winai Chidchiew, the Subdistrict chief (Kamnan) for Kata-Karon, has lashed out over the project to build a new road to Freedom Beach, accusing local officials of trying to push the project through for their own benefit.

Kamnan Winai alleges that the road, planned for the headland south of Patong Bay (story here), is being pushed through by local officials who stand to profit from its creation.

“Those who own private land in the area will benefit because land values for plots alongside the new road will increase,” Kamnan Winai told the Phuket Gazette.

“I would be happy to support the project if it were really needed by local residents, not just officials or investors,” he added.

Kamnan Winai made the accusation at the second public hearing for the project, on October 15.

About 50 people turned out to hear the revised plans and voice their opinions.

The project passed its first public hearing on July 30.

Patong Deputy Mayor Chairat Sukbal, who has volunteered some of his own land for the project, defended the project at the October 15 meeting.

“I think this road will benefit all people and will become a new tourist attraction where people can take photographs and and enjoy the beautiful view… That’s why I gave some of my land for it to be built,” he said.

Mr Chairat said he saw three main objectives to be achieved by building the road: a tsunami evacuation route would be created for the people of Tri Trang Beach; motorists from Patong would have an alternative route to head south; and a public recreation and exercise area would be created for residents to use.

“But the local residents have to vote to support it. If they do not approve it, then the project will not go ahead,” Mr Chairat assured.

Kamnan Winai was steadfast in his opinion that the real purpose of the road was financial.

“Supporters claim that this project is for the benefit of local residents, but it isn’t,” he said.

“Private investors are the ones with the real interest. If the government didn’t provide funds to build the road, I’m sure the municipality could easily find investors to fund it privately,” he said.

Kamnan Winai said the only factor holding up the project from being railroaded through was the level of clearance required for the road to cross protected forest and SorPorKor land.

“Many officers want this road approved, but all of them have failed because sections of it need to cross protected forest,” Mr Winai alleged