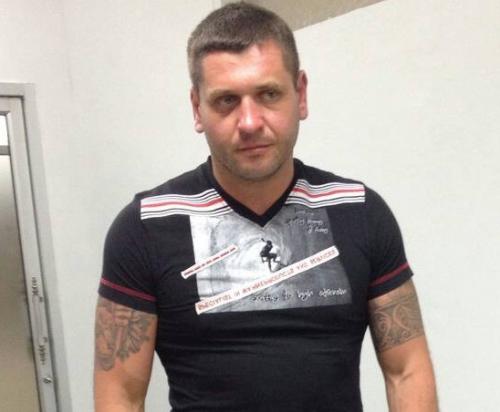 PHUKET: A Russian tourist has blamed overindulgence in alcohol for a spree in which he pushed over a statue honoring a temple abbot in Karon late Tuesday night.

Oleg Fomenko, 31, was arrested at 9pm and taken to Karon Police Station for questioning on Thursday night after officers identified him through CCTV footage at Wat Karon (map here).

The video showed a man dressed in black pushing over a statue of Luang Por Kongdet, the resident abbot at Wat Karon, at 12:46am on Wednesday.

On seeing the footage, Mr Fomenko admitted that he was the man captured on screen, but said he could not remember anything about his antics that night.

“He claimed he was drunk and could not control himself, and that he couldn’t remember what he did,” Karon Police Superintendent Weerawat Jantarawichit told the Phuket Gazette.

Police believe Mr Fomenko was also responsible for using a crowbar to smash the window of a six-wheeled truck parked nearby.

“We think he is the same person who attempted to hotwire and steal the truck,” Col Weerawat said.

Officers located Mr Fomenko after scouring the neighborhood for a man matching the description in the video.

“Police questioned people in the area and learned that a man matching the description was believed to be staying in Soi Patak 18,” Col Weerawat said.

Officers moved in and arrested Mr Fomenko after he was spotted.

Phuket’s Road to Freedom under fire for corruption