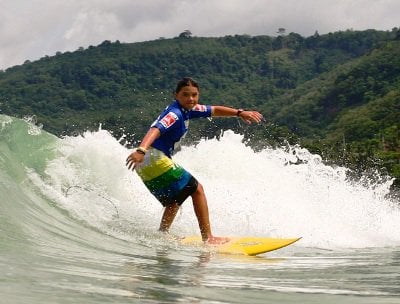 PHUKET: The Quiksilver Thailand 2011 Surf Competition finals are being held today – so get on down to Patong Beach in Phuket and catch the region’s best surfers in action!

All surfing divisions were in action on Friday in the last day of qualifying for today’s finals.
Thirteen competitors enjoyed one meter waves in the Women’s Division which was held first. After six heats it was Yasniar Gea from Indonesia, Gamala Hanafia of Indonesia, Charmaine Gale and Phuket’s Annissa Flynn who will compete for the top spot and a 7,000 baht cash prize.

Roxy Team Rider, Gamala Hanafia, was relieved to make it into the final.

“I had a couple of close calls in my heats, where I needed just one more good wave to make it through, and somehow I always got it. Hope my luck is that good for the final,” she said.

Experience was evident during the Masters Division (over 35 years of age), with competitors expertly handling the relatively smaller waves. It was Wayan Gantiyasa from Indonesia who secured the highest wave scores and combined heat score in his semi-final. The final today pits Gantiyasa against Tatsuya Koboli from Japan, Devin Long and Chalong Thongsak from Thailand.

“This is my first time here to Phuket, and it’s been a lot of fun. My nephew Garut Widiarta came here a couple of weeks ago for another surf event, and when he came back he convinced me to come along. I’m so glad I did,” said Gantiyasa.

Gantiyasa grew up on Kuta Beach in Bali and is one of the first Balinese to surf internationally. He is a mentor to many of Bali’s top surfers.

Friday’s competition concluded with round 3 of the Men’s Open Shortboard Division. Bali’s Lee Wilson posted the highest score in this division – a 7.9 out of a possible 10 – remarkable, given the conditions and psychological element of competing against the 2010 Quiksilver Thailand winner, Tipi Jabrik.

“Tipi jumped out to the lead early and so I had my work cut out for me. I was so happy when I heard the score and that I got the lead, then I lucked another nice little wave where I got a couple of good turns in and scored almost five points. It was enough to get me through,” Wilson said.

The exciting conclusion of the Quiksilver Thailand Open 2011 is happening today with lots of great surfing action, games, surf clinics, and music on the beach.

Tonight promises to be an epic event at the Jungceylon Mall with the awards presentation and after party at Famous.