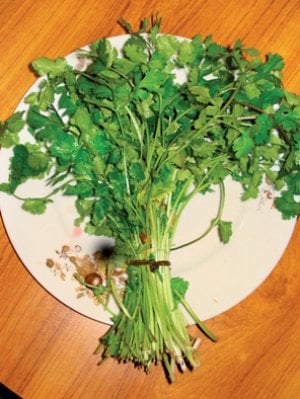 PHUKET: As anyone who lives here in Phuket can testify, green leaves are as crucial to Thai cuisine as lettuce is to a western salad and mint to English roast lamb.

Indeed, the edible leaves of at least three herbs – coriander, basil and mint – are present in many international dishes, both east and west of the Indian Ocean. However, fresh coriander leaves are more widely employed in Southeast Asian cooking.

The herb grows here more readily than in the temperate climes of Europe where the crushed, dried seeds are a more common ingredient in recipes. Buy some seeds (widely sold as a spice) and unless they have been adulterated, they will sprout easily in pots. Importantly, don’t ignore the root. Crushed with garlic and pepper, it makes the most widely used seasoning in Thai food. Smells odd, but tastes divine.

Similar in appearance, Chinese celery also boasts foliage that resembles European parsley (one of the names for coriander is Chinese parsley). Moreover, because of its strong flavor – not remotely like conventional celery – it is normally added, sparingly, to soups, fried rice and pork dishes. Ken chai is often brought home from the market in this household.

Basil is, next to coriander, the most used leaf herb in Asia. It is also the most widely grown, partly on account of its tendency to germinate like a weed. In our household, we have no need to buy basil; it keeps appearing unannounced in the garden.

Ocimum basilicum (bai horapa in Thai) is the most common variety, similar to the sweet basil so beloved by Italians they venerate it as the ‘royal herb’. In Italy, it is the key ingredient in pesto sauce.

The dark green leaves, borne on reddish stems, often picked and eaten raw, are commonly found on plates of herbs that accompany Thai food, but the leaves are tough; hence they are usually macerated, along with other herbs, and added to curry pastes.

Sometimes used in meat dishes, their distinctive aroma permeates the food. My Thai partner dislikes the smell, and carefully picks out the offending leaves and puts them on my plate. Mai pen rai.

Two other less common varieties are lemon basil and the so-called ‘holy’ basil. Lemon basil also flourishes in my garden, a smaller leaved and sap-green version of sweet basil. Known as bai manglak, it has a lemony scent; its soaked seeds are used in a dessert made with coconut milk. Holy basil, so-named because it is a sacred Hindu herb, has narrow leaves, and is rarely eaten raw, but it is cooked in much the same way as sweet basil.

Spearmint (shades of Wrigley’s chewing gum?) occurs in Thailand but, like its cousins, peppermint and applemint, it needs water and shade, not always readily available in Phuket’s gardens. I have not attempted to grow conventional mint here, but it was one herb that grew like a weed in my London patch.

Seed is available, so it must be worth a stab, especially if sown in a container that gets regular watering. As most farang know, mint sauce, made with chopped mint leaves, vinegar and sugar, is a natural accompaniment to roast lamb, while fresh green sprigs
add a distinctive fragrance to garden peas.

Fennel (foeniculum vul-gare) is another herb more associated with temperate climes – especially the Mediterranean where its attractive leaves, delicately feathery like those of dill, are used to flavor sausages and fish dishes. Italians love the bulbous root of Florentine fennel, using it in pastas and stews.

However, in Southeast Asia, only the seeds, which have a mild, aniseed tang are used as a spice; a key ingredient in Indian garam masala dishes and in some Thai curry pastes. A perennial herb, fennel grows profusely in Europe; a tall, upright plant with distinctive umbels of tiny yellow flowers. A familiar presence, as I recall, on the roadsides of Andalucia.

If in Thailand it is sparingly cultivated, I am tempted to ask why, since the climate in countries such as Syria where it is produced commercially, is much more variable than here. Another herb worth trying?

Finally, a herb that is a familiar presence, the kaffir lime (citrus hystrix). Known in Thailand as bai magrut, it is grown principally not for its fruit, but for its bright green leaves which have a distinctive double-lobed appearance (see photo).

Unlike the readily available lime fruits which are cultivated for their juice, this variety has a darker green, warty skin, but relatively little juice; it is the aromatic leaf which is a staple of Thai cuisine.

Like the equally tough bay leaf, it is usually left uneaten after being added whole to provide a distinctive lemony edge to soups, especially tom yam. It is also used as an ingredient, chopped up, in Panang and red curries.

I have two of these thorny plants in my kitchen plot, but they are fastidious about soil conditions and consequently slow-growing. You might find it more convenient to buy a bunch or two in the market and store them in the freezer.

Amazingly, the leaf will not lose its flavor or texture, and as a bonus, both the rind and the leaf can also be grated and used to add zest to cooked food. However, I am reliably informed that kaffir lime will flourish in a container.

So all of these herbs can be cultivated in pots, even if you have only a patio, and surely that is good news for the taste buds.

Phuket Gardening: Going back to your roots