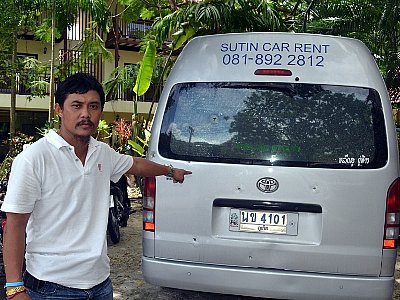 PHUKET: In the latest violence in Phuket, the controversial chief (kamnan) of Karon sub-district narrowly escaped with his life early this morning when his would-be assassin failed to hit him after firing at close range.

Winai Chidchiew told the Phuket Gazette he was returning by motorcycle from a funeral on Patak Road Soi 9 when the attack occurred at about 1am today.

“Along the way, I encountered my friend Narong Saemin at the entrance of Soi Patak 9. We chatted there for a moment. Then, I saw a pickup truck arrive and stop for a few seconds,” said Kamnan Winai.

“I thought the pickup belonged to friends of my friend. Later, I heard someone say ‘hey’, so I turned my head in the direction of the voice. Then I saw a man in the pickup lower the window and point a gun in my direction. The man pulled the trigger one time,” Kamnan Winai explained.

His assailant was only about three meters away when the gun went off, he said.

“Luckily, I could dodge the shots by shifting my head away. I fell down on the ground. I thought that the gunman would fire again, so I hid myself next to a shop at the entrance to Soi Patak 9,” he added.

Then the pickup drove off, he said.

Kamnan Winai got a good look at his assailants, he said.

The gunman was sitting in the passenger seat of the truck, a green Mitsubishi with Trang license plates with the numerical sequence 3813. Another man was driving, he said.

Neither he nor Mr Narong suffered any injuries, Kamnan Winai said.

Once the pickup truck left the scene, Kamnan Winai and Mr Narong quickly returned to their respective houses.

“It was still dark and I did not feel safe. So, I went back home immediately after the incident,” Kamnan Winai said.

Chalong Police Deputy Superintendent Narong Laksanawimon, along with investigators and forensic police, went to the scene.

From the initial investigation, Lt Col Narong said eight shotgun pellets had peppered the back of a passenger van that was parked in the area, at the Baan Karon Resort.

“I guess it must have been an illegally made shotgun or a ‘thai pradit’ (homemade) firearm. We are still not sure whether the target of the gunman was Kamnan Winai, Narong Saemin, or both. Both men are involved in activities involving the phon prayot (benefits) of others,” he said.

Mr Narong is suspected of involvement with gambling, while Kamnan Winai himself has conflicts with many people in Karon, including business and hotel operators, he added.

“We are still collecting evidence. We will make a sketch of the gunman, since Kamnan Winai said that he could remember him, to try to determine his identity, Lt Col Narong said.

“As far as I can remember, the gunman has the dark skin tone typical of a southern Thai male and was about 30 years old,” Kamnan Winai said.

The outspoken long-term kamnan has had strained relations with the Chalong Police over the years, to say the least.

In 2009, he led a public protest over their alleged indifference to crimes perpetrated against residents and tourists alike. They were more interested in collecting fines for petty traffic violations, he said.

Last May, he accused police of extorting money from illegal street souvenir vendors, after the same vendors accused him of being behind the racket.

Most recently, he was among those who complained to a senate subcommittee of graft in the department over an alleged police extortion racket targeting tailor shops in the Kata-Karon area.

The racket allegedly involves monthly payments in exchange for officers turning a blind eye to shops who hire ethnic Nepalis to work for them as “tailor touts”.

The Senate investigation team, led by retired police general Jongrak Juthanont, promised to conduct its investigation in a way that is fair to both sides. Its findings have not yet been released.