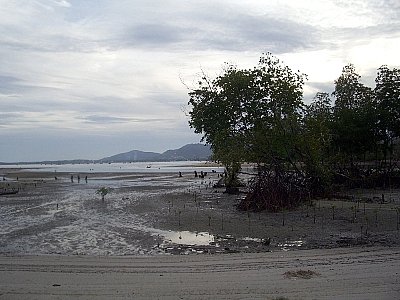 The boys – Pinitchnan Na Roied, 5, and Wannawut Thanakarn, 7 – were last seen playing in the Klong Mudong canal (map), a large tidal estuary that flows into mangroves along the Phang Nga Bay coast.

A Kusoldham Foundation rescue worker told the Phuket Gazette, “We received a report at 4:38pm from a local resident there that someone had drowned in Klong Mudong, near the Chai Yo Seafood restaurant.

“Witnesses said they saw three boys playing in the water in that area at about 1pm. A fisherman passing by told them to get out of the water because it was moving dangerously fast following the heavy rains.

“But after warning the boys he just went about his business,” he said.

A local resident later saw the body of Pinitchnan floating in the water. He pulled the body out of the water and onto a nearby bridge.

“After realizing who it was he rushed to the homes of the other two boys to check if they were safe. The one boy who was home said he left the creek immediately after being warned by the fisherman. The other two boys stayed to play,” said the rescue worker.

Concerned about Wannawut, who was still missing, local residents checked his friends’ homes before heading back to the bridge to search for him.

“Then the villagers saw something that looked like hair floating below the surface of the water. It was Wannawut. They couldn’t get his body out of the water, so they called us,” the rescue worker said.

“It took our divers about 30 minutes to recover the body. The bodies of both boys are now at Vachira Phuket Hospital,” he added.

Klong Mudong has recently gained popularity among local residents and tourists as a haven away from the busy beach areas such as Patong, Kata and Karon on Phuket’s west coast.

The natural scenery has inspired many artists and been the focus of local photography competitions.