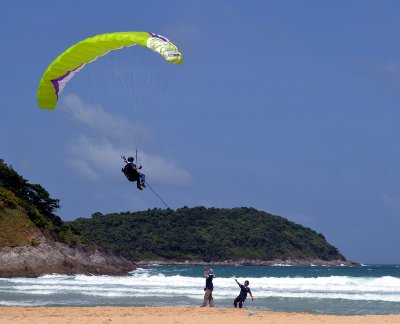 “He was missing for a while before he was found injured in the jungle behind the Royal Phuket Yacht Cub,” said Dr Prasert.

Mr Lüdtke was rushed to Phuket International Hospital, where his only serious injury was a broken left arm.

He will be discharged from hospital this afternoon.

Mr Lüdtke told the Phuket Gazette that he had more than 20 years experience in paragliding.

“Most of that is in Phuket,” he said.

Although he declined to explain exactly what caused the plunge, Mr Lüdtke added, “Once you’re up in the air anything can happen. You have to cope with any problems that come up the best you can.”

“The club warned him many times not to fly on his own before this happened,” he said.

“For this sport you have to make sure of three things: the person’s skill, the paragliding equipment and the wind conditions. You cannot miss any of these things if you want to fly safely,” he added.

Dr Prasert is also one of the main organizers of the annual Phuket Fun Fly paragliding event.

Although many gliders arrived on Phuket to take part in the event this year, all flights were grounded on the opening day for safety reasons due to strong winds.

“This is not the first paragliding accident, but it is the first time we have had a serious injury,” said Dr Prasert.

The club will now look into having all paragliders wanting to take to the air in Phuket first being required to register with the club as a legal requirement.

“I do not want any more accidents to happen in the future,” he said

After this news article was published, the Gazette received the following by email:

I refer to your recent article regarding my paragliding accident at Nai Harn. After the accident, I walked clear of the area and called an ambulance myself to obtain medical assistance. My injuries consist of a small fracture to a wristbone on my right arm. My left arm is fine.At no time was I “missing”and found in the jungle behind the Royal Phuket Yacht Club. I was accompanied by two other friends who were well aware of my accident.I was experimenting with a new racing wing and well aware of the risk that new equipment can bring, but in order to use it you have to fly with it.Flying greetings,Ralph Lüdtke