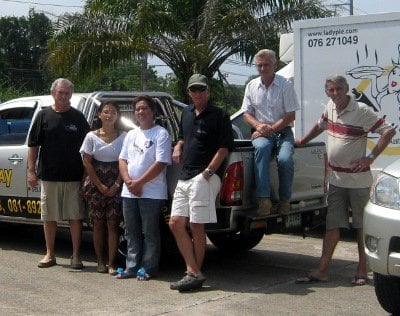 PHUKET: What started off as a conversation between Phuket businessman Paul Newson and his wife and business partner Skulna “Bird” Varayu has quickly developed into a relief effort to assist flood victims in the Central Thailand province of Nakhon Sawan.

The original idea focused on helping immediate family in Nakhon Sawan, but the concept quickly snowballed into a larger effort to take aid from Phuket to the most affected area in the region.

The project now involves four vehicles that the group – all members of Phuket’s Grumpy Old Men (GOM) society –plan to load to bursting point with essential items needed to reunite flood-affected families with their homes, many of which have been submerged by severe flooding.

Once there, the group plans to involve the local communities to ensure that the aid reaches the right people. Victims of the floods will be able to register at their local temple and receive aid directly from there.

“This is about helping people in the worst affected areas. You have to imagine that these people’s houses have been under water for some time,” Mr Newson told the Phuket Gazette.

The “mercy mission” volunteers hope to start the 14-hour journey in the second week of December. They have, with the help of other GOMs, been collecting aid supplies to take to the affected areas.

“We don’t want people to give us money” said Ms Bird.

“One particular item which will be sorely needed is children’s clothing, at this stage we have not received donations of this sort.

“There is also a great need for other things; sleeping mats, mosquito nets and first-aid equipment, and many children have lost toys and school books to the floods,” she added.

Ms Bird explained that with flood waters starting to recede in Nakhon Sawan, people returning to their homes now need to clean them.

“Phuket residents need to look in the backs of their cupboards and garages for unused cooking utensils, household items and clothing they no longer use. Rather than giving money to the cause, people wishing to donate should buy useful household items such as, mops, buckets, disinfectant and other cleaning materials.

Mr Newson also pointed out that the mission was not restricted to the efforts of GOMs and their families.

“And this is not about the companies we represent. Moreover, it is about showing that foreigners in Phuket are capable of helping out when its needed,” he said.

Donations to the cause can be made from 9am to 5pm, Monday to Friday, at four locations in Phuket:

Donations will stop being collected from the four drop-off points on November 30.