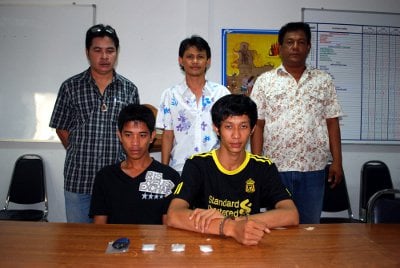 PHUKET: Two suspected Phuket drug dealers have been busted by Chalong police. The young men were nabbed while in possession of methamphetamines during two different sting operations over the weekend.

The arrests were made after Chalong police followed up on a tipoff that “teenagers” were selling drugs around Chao Fa East Road.

“At about 4:15pm, we noticed a man on a motorbike that matched the description we had been given. He was near the entrance to the construction site on Soi Nakok, Moo 5,” said Lt Col Charan.

The police said they identified themselves and searched the suspect, finding 150 ya bah (methamphetamine) pills in his pants pockets.

Additional information led the police to a rental accommodation where they found 7.5 grams of ya ice (crystal methamphetamine) hanging in a bag from a clothes line.

The suspect, Somkiat Nuanui, 24, from Krabi was arrested and charged with possession and intent to sell category one illicit drugs.

Anon, 21, from Songkla, was found to be in possession of 6.5 grams of ya ice. He was also charged with possession and intent to sell a category one illicit drug.

In total, the police confiscated 150 ya bah tablets and 14 grams of ya ice from the suspects.