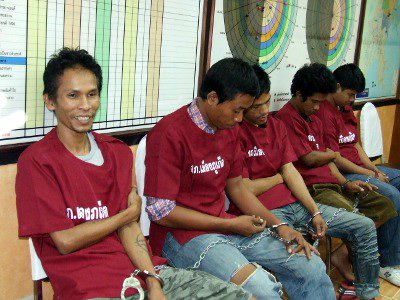 At a press conference today, Phuket City Police Superintendent Chote Chidchai said that a team of anti-drug officers seized 60 ya bah (methamphetamine) pills and more than 40 grams of ya ice (crystal methamphetamine).

Officers also seized two handguns – a .38 and a .22, both unregistered – and a Honda Jazz car.

The haul of arrests and evidence seized all came from a single arrest after a tip-off from an undercover police officer, Col Chote explained.

Acting on the tip-off, police on Saturday arrested Onjan Chuaykua, 22, from Trang with 0.43 grams of ya ice in the car park at Bangkok Hospital Phuket.

After questioning Onjan, police then arrested Wiparat Sainamsai, 19, with 0.42 grams of ya ice in front of Aoi Jai Apartment in Soi Patchari in Rassada at 7:30pm.

Both women were charged with being found in possession of a Class One drug.

After questioning the two women, police on Sunday arrested Kriangkrai Kuangmuang, 36, from Nakhon Sri Thammarat in his room at Aoi Jai Apartment.

They also arrested Nathi Boonchuay, 24, from Trang, at a house in the Phuket Villa Suan Luang development in Wichit.

In the the two raids police seized a total of 555 ya bah pills, 39.93 grams of ya ice, a mobile phone and a set of digital scales.

During the raids on the two men, police also seized a Honda Jazz car and 8,000 baht cash.

After questioning Kriangkrai and Nathi, officers arrested three men from Nakhon Sri Thammarat who all lived in the one house also at Phuket Villa Suan Luang in Wichit.

All three men were charged with possession of a Class One drug.