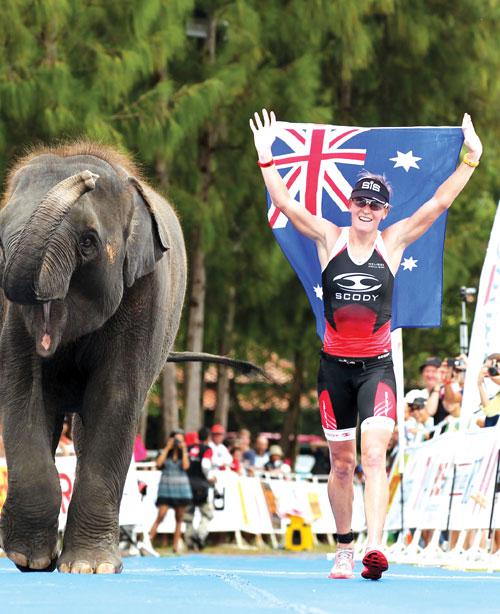 PHUKET: Challenge Laguna Phuket’s Tri-Fest carnival, which will see thousands of top international athletes from around the world descend on the island, was previewed by media in a special conference at the Tourism Authority of Thailand (TAT) headquarters in Bangkok recently.

The week-long event will kick off with the legendary Laguna Phuket Triathlon (LPT) on November 24, which is celebrating its 20th anniversary this year by launching an inaugural Challenge Laguna Phuket a week later on December 1.

The multi-media event in the Thai capital showcased some of the elite triathlon stars set to compete in both races and thrill spectators who each year throng to see the action in the spectacular swim, bike and run course routes in and around Laguna Phuket.

LPT and Challenge Laguna Phuket are linked by a Tri-Fest of training and social activities at Laguna Phuket during the week between the two races.

Thai Airways International is providing travelling athletes online booking via challengelagunaphuket.com with a 15kg baggage upgrade for bikes, while each athlete will receive a King Power Duty Free discount voucher.

NBT News Focus reporter Pondsuda Sanguansuk was the winner of the conference’s lucky draw for media and won a two-night stay for two at Angsana Laguna Phuket with return flights on Thai Airways.

The CHALLENGE Laguna Phuket’s Tri-Fest carnival is proudly sponsored by the Phuket Gazette and PGTV. ‘Phuket Today’, co-produced by PGTV and MCOT World, will be covering this event. Phuket Today, broadcast locally on Phuket Cable, Rawai Cable and KDTV cable networks, nationally on TrueVision 85 and 59, GMMZ and PSI, and internationally to over 100 countries around the region. For full schedule click here.