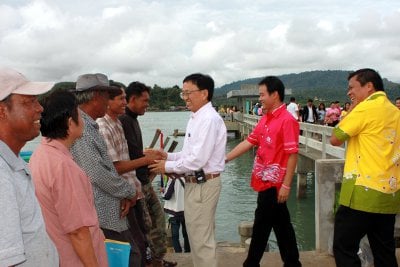 PHUKET: The new 10-million-baht pier on Koh Maphrao in Phuket was officially opened with a ribbon-cutting ceremony presided over by the Phuket Provincial Administration Organization (OrBorJor) President Paiboon Upatising on Friday.

Koh Maphrao (literally “Coconut Island”) is part of Koh Kaew Village Six. It is now expected to be accessed by 300 to 500 tourists daily, many of whom are destined for The Village Coconut Island villa resort that opened five years ago and is now in its second phase.

The need for a new pier was obvious to all, but when Koh Kaew Tambon Administration Organization (OrBorTor) began to look into the project they estimated the cost at 14.9 million baht, far more than the 2mn baht in funding it could provide.

OrBorJor representative for Koh Kaew Suphachoke La-ongpetch approached the council for support. The OrBorJor saw the importance of the project and agreed to provided 8.325mn baht in funding, as well as technical expertise to complete the structure for a total cost of 10.325mn baht, well under the original estimate.

Koh Kaew OrBorTor President Kuakiat Jitkua thanked the OrBorJor for their key role in building the pier, saying it will make lives better for the many local residents who have to make a daily commute to the mainland for work.

It will also help local youth further their education, as there is only a primary-level school on the island.

OrBorJor President Paiboon said he hoped the new pier would bring prosperity to the island residents.