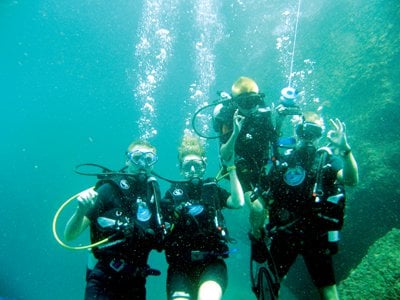 For years Emil has been coming to Phuket with his parents Mette and Lars Engahl. While they’ve been are off exploring the incredible underwater world resting on Phuket’s doorstep, he’s been shore bound, pleading, “I want to dive too. I want to dive too.”

This year when the family landed on Phuket things were supposed to be different. Emil, a member of the PADI Seal Team (pool “adventure” diving for children above 8), was prepared to take the next step and get his Jr PADI Open Water certificate, which would allow him out into the open water.

Clearing the theory and pool skills without a hitch Emil was ready for his first open water “fun” dive. It was time to see sharks, turtles, whale sharks and everything else he had been dreaming of seeing for years.

Cold in the wetsuit too big for is 135 cm frame and perhaps unsettled in the unfamiliar environment, Emil was unable to equalize, stopping him from descending more than a few meters below the surface. After a few days he dropped out of the course.

“So he dropped out of the course and everyone was sad about that,” Michael Wallentin, General Manager at Kon-Tiki explained. It was clear that Emil’s original excitement and charm had affected everyone on the dive boat and the shop.

“They came back and I couldn’t see any reason why he wouldn’t because I know he was already a diver,” Mr Wallentin said.

Emil wasn’t sure if he should get back in the water this holiday or wait a couple years to try again.

After talking with his parents and getting plenty of encouragement, and wetsuit that fitted, Emil was willing to give it another shot.

“It’s very uncomfortable when you can’t clear your ears. I think Michael did a good job convincing Emil that he could do it,” Mr Engahl said.

Michael took Emil to the calm, shallow waters of Kata beach – it was the turning point.

Then it was his parents who had to let go, as Emil nonchalantly informed them “I just go diving with Michael”.

Like a knight being hoisted onto his stead Emil, perhaps as heavy as the equipment he was wearing, was carried to the back of the boat by the Kon-Tiki’s dive staff and helped into the waters off of Ratcha Noi.

“He was very excited. He grabbed me and was like ‘look’ and was putting his ‘shark fin’ on his head,” Mr Wallentin said, recounting Emil’s first shark experience.

“He’s a good buddy. I say stay close and he stays close the whole time. He was even swimming around trying to find things – that’s actually my job,” Michael joked.

With eight dives logged there is no limit to Emil’s ambition. He corrects his mother: he doesn’t want to be a Master Diver, he wants to be at the very top – a Course Director. Wreck diving and cave diving are both on his quickly growing dive to-do-list as well as seeing manta rays and whale sharks.

Smiling from ear to ear Emil listed some of the marine life he had already seen: sea snake, dragon fish, scorpion fish and turtles.

Emil already has a job offer from Mr Wallentin to work at Kon-Tiki as soon as he gets his Dive Master certification.

In his parent’s eyes Emil, as a diver, is an adult.

“When I dive with Emil I rely on him. That’s my life depending on him doing the right thing and the other way around. There is a trust. That responsibility brings a family closer,” Mr Engahl said.

Though Emil and his family have already returned to the cold waters of Denmark, the diving isn’t going to stop. Emil plans on logging 15 more dives before he returns to Thailand. He will no doubt be pushing his parents to get him a 7mm wetsuit and splash into some of the stunning dive sites scattered off of the many islands of Denmark.

In memory of Bjorn TÃ¤ckmann