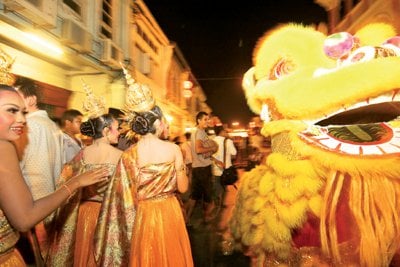 PHUKET: Just when you thought all the festivities linked to the New Year were over, here they come again in the guise of Chinese New Year with celebrations to go on for 15 days.

Today we enter the 4,709th Chinese year and the “Year of the Dragon”, according to the Chinese zodiac. Chinese New Year, the most important of all traditional Chinese holidays, is known in China as the “Spring Festival”.

Although regional customs and traditions concerning the celebration of the Chinese New Year vary widely within China, people will spend a lot of money to buy presents, decorations, food, and clothing during this period. Purchasing new clothing, shoes, and getting a hair-cut also symbolize a fresh start.

Clothing, mainly featuring the color red, is commonly worn throughout the Chinese New Year because it is believed that red scares away evil spirits and bad fortune. In addition, people typically wear new clothes to symbolize a new beginning for the new year.

It is also the tradition that every family thoroughly cleans the house to sweep away any ill-fortune in the hope it will make room for good incoming luck. Brooms and dust pans are put away on the first day so that the newly arrived good luck cannot be swept away.

Windows and doors will also be decorated with red and gold Chinese auspicious phrases and couplets with popular themes of “good fortune” or “happiness”, “wealth”, and “longevity”.

In many households where Buddhism or Taoism is prevalent, home altars and statues are cleaned thoroughly, and decorations from the previous year are taken down and burned a week before the new year starts, to be replaced with new decorations.

First day
Early in the morning, children greet their parents by wishing them a healthy and happy new year, and receive money in red paper envelopes. The first day is for the welcoming of the deities of the heavens and earth, officially beginning at midnight. Many people, especially Buddhists, abstain from meat consumption on the first day because it is believed that this will ensure a long life. Some consider lighting fires and using knives to be bad luck on New Year’s Day, so all food to be consumed is cooked on the days before. On this day, it is considered bad luck to clean.

Most importantly, the first day of Chinese New Year is a time to honor one’s elders, and families visit the oldest and most senior members of their extended families, usually their parents, grandparents and great-grandparents.

Family who are married also give red envelopes containing cash to junior members of the family, mostly children and teenagers. Business managers also give bonuses in red envelopes to employees for good luck and wealth.

Second day
Incense is burned at the graves of ancestors as part of the offering and prayer ritual.

Some believe that the second day is also the birthday of all dogs and honor them with special treats.

Third day
The third day, known as “red mouth” is generally accepted as not a good day to socialize or visit your relatives and friends. This is also considered a propitious day to visit the temple of the God of Wealth and have one’s future told.

Fourth day
In communities that celebrate Chinese New Year for only two or three days, the fourth day is when corporate “spring dinners” kick off and business returns to normal.

Fifth day
It is common in China that on the fifth day people will shoot off firecrackers in the attempt to get Guan Yu’s attention, thus ensuring his favor and good fortune for the new year.

Seventh day
The seventh day is the day when everyone grows one year older.

For many Chinese Buddhists, this is another day to avoid meat

Eighth day
Another family dinner is held to celebrate the eve of the birth of the Jade Emperor. However, everybody should be back to work by the eighth day. All government agencies and business will stop celebrating by the eighth day. Store owners will host a lunch / dinner with their employees, thanking their employees for the work they have done for the whole year.

Ninth day
The ninth day is traditionally the Jade Emperor’s birthday. This day is especially important to Hokkiens. Come midnight of the eighth day of the new year, Hokkiens will offer thanks, giving prayers to the Emperor of Heaven.

Tenth day
The Jade Emperor’s party is also celebrated on this day.

Eleventh through fifteenth day
On these days, friends and family are invited for dinners. On the 13th day people will eat pure vegetarian food to clean out their stomach due to consuming too much over the last two weeks.

The 15th day is celebrated as the Lantern Festival, and families walk in the street carrying lighted lanterns. In Malaysia and Singapore, this day is celebrated by individuals seeking a love partner, a version of Valentine’s Day.

This day often marks the end of the Chinese New Year festivities.

The Chinese New Year tradition is to reconcile, forget all grudges and sincerely wish peace and happiness for everyone.