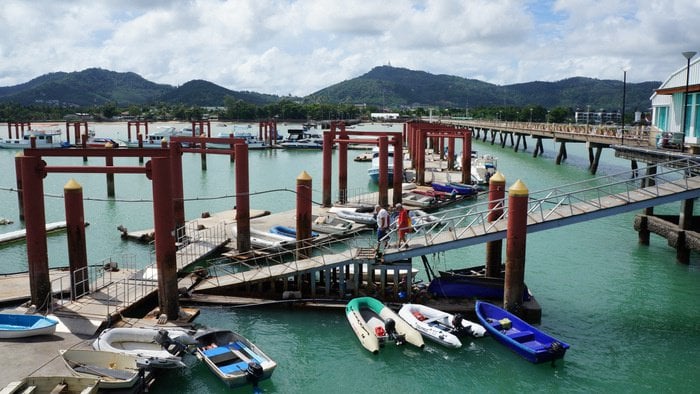 PHUKET: The Transport Ministry has granted the Phuket Marine Office a total of 172 million baht in order to complete the seawall and marina in Chalong Bay.

Transport Deputy Minister Arkhom Termpittayapaisith on Saturday revealed the news during his inspection of the facilities, which are currently under construction.

“The Marine Department has approved 98mn baht to complete the final phase of the seawall, which is slated to be finished by November,” Mr Arkhom said.

“Another 74mn baht has been granted to complete the final phase of the actual marina, which is now expected to be finished by September next year.”

The Chalong Marina has taken more than eight years to complete. The latest allocated funds bring the price tag for the facility up to 477mn baht.

“After construction is complete, we will have a much better marina and a strong seawall, which will support yachts and superyachts,” Mr Arkhom said.

Ongoing repairs to the marina have been needed for years, as the deteriorating facility slowly became a safety hazard for tourists boarding or disembarking boats there (story here).

Phuket Marine Office Chief Phuripat Theerakulpisut in October last year prohibited boats from mooring within 200 meters of the still-incomplete marina for an entire year while renovations and construction to the seawall were carried out (story here).

Just months earlier, the marina was falling apart, with officials posting a line of small red and white flags to mark a large metal pillar that lurked beneath the water’s surface near the pier, posing a hazard to passing boats (story here)

“After the project is complete, we will have a facility that can accommodate about 45 yachts,” Mr Phuripat told the Phuket Gazette today.

The push to complete the long-awaited marina follows Tourism and Sports Minister Kobkarn Wattanavrangkul pledging her support for changes in visa and chartering legislation to secure the island’s position as the top yachting destination in the region (story here).

A public hearing, with an English-language translator, to discuss the legal measures needed to support Phuket’s push for regional supremacy will be held on May 11 (story here).