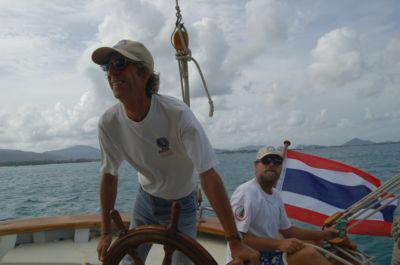 PHUKET CITY: Phuket lost one of its local characters on Friday when Andrew Newman passed away in Bangkok Hospital Phuket, aged 57, presumably of a heart attack.

Andrew, a well-loved member of the local sailing community, was responsible for several local websites as he was first and foremost a computer programmer known as “Android Humanoid”.

This self-penned nickname came from the fact that Andrew wore a prosthetic limb after losing a leg in a motorcycle accident.

Despite this handicap, Andrew kept his good humor and was able to continue sailing in local regattas.

Indeed, it was his love of life and sailing that brought him to Phuket from Darwin some nine years ago. Although an Englishman, Mr Newman had spent many years traveling before settling on Phuket.

On Friday night, many of his friends gathered for an impromptu wake at The Lighthouse in Chalong and at other watering holes he frequented.

It was suggested by his friends that his Australian-made prosthetic leg should be donated to someone in need in Thailand, which prompted the idea of an annual charity sailing race to raise funds for other prosthetic limbs.

It was even suggested the race be called “The Grumpy Stump Race” in memory of Mr Newman’s favorite T-shirt showing a famous dwarf from Snow White in a particularly bad mood.

Mick Kealy, Commodore of the Ao Chalong Yacht Club (ACYC), today confirmed that Mr Newman’s body is being kept at Wat Sawangarom (Wat Rawai), where he will be cremated at midday on Wednesday.

All are welcome to pay last respects.

After the cremation, a wake will be held at the Islander Bar in Rawai.