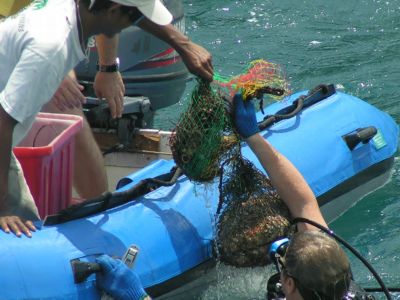 Leaving from Chalong Pier aboard the 27-meter Excaliber II, the team managed to fill two large containers in a one-hour dive with a variety of debris, including bottles, fishing nets, anchors, shoes and flip-flop sandals, from depths of up to 10 meters.

However, calm seas early in the morning soon gave way to choppy conditions as winds picked up and the vessel had to head back to Chalong Bay earlier than expected, at about 11:30 am.

Sea Bees’ Public Relations Manager Frank Mueller told the Gazette that the event was not only aimed at removing coral-killing debris, but also at raising public awareness of the importance of not throwing such items overboard in the first place.

The Sea Bees Diving cleanup was organized with the support of the Thai Dive Association (TDA), accreditation body SSI, and Green Fins.

Also taking part was the 23-meter Dive Asia vessel, which headed towards Koh Khai Nok. A tiny islet located equidistant from Koh Yao Yai and Phuket’s Koh Sireh, Koh Khai Nok is one of the most popular snorkeling destinations in Phang Nga Bay.

Once there, the 30 divers aboard the Dive Asia vessel painstakingly removed some 150 to 200 kilograms of abandoned fishing netting.

Organizer Juergen Schenker of Dive Asia told the Gazette that one diver reported taking an hour to safely remove one square meter of netting without damaging the coral on which it had caught.

Three other dive boats – from South Siam Divers, Sea Fun and Scandinavian Scuba Doo – left at about the same time as Dive Asia and headed in the direction of Koh Racha Yai, where they recovered a huge net found drifting between Phuket and Koh Racha Yai.

Making their way to the east side of Koh Racha Yai was the Scubacat dive boat, with about 20 divers who took part in four garbage collection dives at about 22m deep, where they recovered about 600 kilograms of debris.

Scubacat Operation Manager Prasith Boonsob said that about 85% of the recovered debris was netting and rope. Also recovered were various kinds of fishing tackle – plastic bags, bottles and an old car tire.

Some debris was also collected at a depth of about 10m outside the reef, he said.