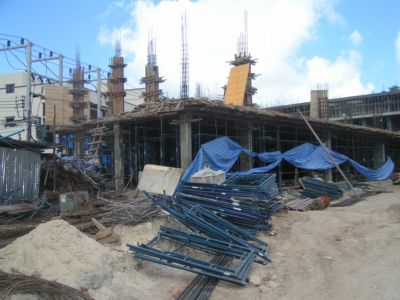 PATONG: Two construction workers were lucky to escape with their lives when the floor of a building they were working on suddenly collapsed on the afternoon of September 18.

Kathu Police Duty Officer Patak Khwunna, who was informed of the accident at about 12:20 pm, rushed to the scene with Kusoldharm Foundation rescue workers.

The site of the floor collapse was a building under construction near the entrance of “Soi Tun” (literally, “Soi Dead End”), which will one day serve as the southern end of the still-under-construction Phang Muang Rd.

According to a worker who was not in the building at the time, the two workers were masons laying down a floor on the second level when the increasing weight of the concrete they were adding suddenly caused the metal support structure to collapse, Capt Patak said.

He identified the workers as 23-year-old Nakhon Phanom native Uthit Chamnanlert and Daeng Kanyaprasit, a 54-year-old from Petchaboon.

Both men, covered with wood and steel construction materials when rescue workers arrived, were taken to Patong Hospital.

Four days after the accident no parties had filed any police complaints in relation to the accident, he said.

However, Kathu Police plan to contact Patong Municipality to request a copy of the building permit to see if it the work was legally authorized, Capt Patak said.

Suppakorn Meetaew, an officer with the Patong City Planning section, told the Gazette by telephone on September 22 that he had just returned from a seminar and would look into the matter as soon as possible.

Jamrong Petchprasert, foreman of the Thavornkul Karnyotha Company, in charge of work at the project site, told the Gazette on September 23 that he was questioned by police about the accident.

Vibrations from a road roller used to compact soil at the project site might have been partially responsible for causing the collapse, he told police.

One of the workers suffered only a wound to his hand, while the other is still in hospital for treatment of a broken rib, he said.

Work on the project, a six-story building designed as a guest house for rent or sale, is back underway, he confirmed.

Masseuse fire attacker out of prison