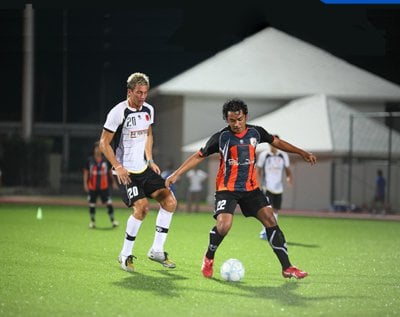 PHUKET: With FC Phuket having recently ended their tumultuous season, the popular Adult Futsal League (AFL) presented by Thanachart Bank has picked up the baton to continue into season nine of the island’s football interests.

Played at Thanyapura Sports and Leisure Club (TSLC) in Thalang, organizers this season have moved the competition from the smaller, dedicated futsal pitch to the full sized synthetic surface established to host rugby matches.

Both Division One and Premier Division matches will be played simultaneously on the pitch, which has been marked specially, providing an action filled arena.

The AFL is being assisted by volunteers from the Thalang Tigers and their Junior teams, with these youth players acting as ball boys, a vital role in keeping the matches flowing throughout the evening.

After the competition was officially opened, presided over by Thanachart Bank representatives, the first game pitted reigning Premier Division Champions Portrait FC against Thanachart Bank, runners-up from last season. In a closely fought match, Portrait got their league campaign off to a winning start with a 4-3 victory.

Meanwhile on the second pitch, the First Division also got under way with AFL stalwarts Island Boys up against season eight Fair Play Award winners Ultraman. In another close match, Ultraman took the lead before the Island Boys hit back with two unanswered goals. It looked as if the Island Boys were going to hold on for the win, but with five minutes remaining, Ultraman equalized and the match finished in a 2-2 draw, giving both teams a valuable league point each.

Following the first two opening games, season eight Division One Champions Thalang Tigers roared into action against Honda. Consolidating last season’s success, Thalang proved their promotion was deserved and sent a brutal message to the rest of the league with a 6-1 victory over the hapless Honda.

The final match was a battle between the home team of TSLC and Chevrolet. A tentative first half saw both teams trying to find weak points in their opposition, but it was TSLC who broke through twice and took a 2-0 lead into the second half.

After the break, Chevrolet struggled to get back on level terms but a well organized TSLC back line thwarted their efforts. TSLC then scored two more quick goals to end the match 4-0 and secure three points.