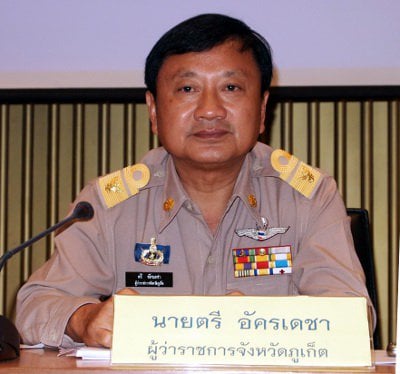 PHUKET: A team of Ministry of Interior (MoI) officials from Bangkok will arrive in Phuket in the coming weeks to tackle the island’s long-standing problems with “black plate” taxis and their drivers, Phuket Governor Tri Augkaradacha has announced.

The move follows a number of serious complaints received by the ministry regarding “black plate” taxis, the local name for regular vehicles used illegally as taxis.

Among the complaints to be addressed are threatening behavior by drivers and unfair prices, said Gov Tri.

“We are always receiving complaints about ‘black plate’ taxis, which can be found at most tourist attractions in Phuket.

“Sometimes, the drivers have tried to steal passengers from other drivers and fighting has ensued,” said Governor Tri.

Most complaints came from Patong, Kata, Karon and Sakoo, he added.

The move for Bangkok to send a team down to deal with the situation follows complaints being made directly to ministry officials in Bangkok, he said.

“I heard that people filed complaints about ‘black plate’ taxis ripping people off with the Prime Minister’s Office as well as the MoI,” said Governor Tri.

“Now the Ministry of Interior is to send an ‘ad-hoc’ team to Phuket to solve problems with ‘black plate’ taxis. They plan to come in February,” he added.

Governor Tri, who has had a difficult time with public transport issues, said he appreciated the support from Bangkok.

“We didn’t just watch the problem and do nothing about it. I set up a working committee to keep chipping away at the problems, but it takes a lot of time and effort.

One initiative, by the Phuket Land Transportation Office and Department of Local Administration, has been to encourage illegal taxi drivers to upgrade their vehicles so they could be registered as genuine taxis.

Once the “black plate” taxi was fully and legally registered as a “green plate” taxi, the driver could then continue to work as a legitimate taxi driver – with no punishment at all for the years worked outside the law.

But the project has so far enjoyed only limited success, said Gov Tri. “Some ‘black plate’ taxi drivers have registered with us. Our next step is to install meters in their cars, but there are some rules that prevent us from doing this, such as the age of the vehicles.

“Buying a new car is expensive, that’s why not many of the drivers want to register their cars as taxis and make them legal. This is why we seem so slow in solving this problem,” he said.