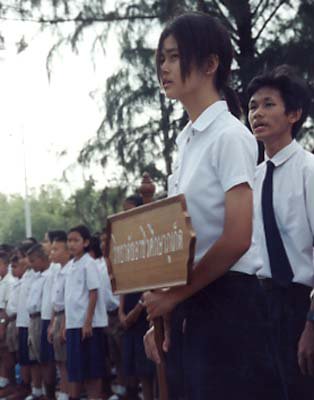 PHUKET TOWN: Governor Udomsak Usawarangkura today announced that Phuket is winning the war on drugs. “The island is not completely rid of them, or of the users and dealers, but society will no longer be affected by them,” Gov Udomsak declared. At a special ceremony at Saphin Hin, Gov Udomsak and others – including Vice- Governors Pongpow Ketthong and Winai Buapradit – vowed to be “good government officers” and “not involved with drugs in any way”. Two thousand students from Phuket schools also made a solemn pledge to eschew the use of drugs. Phuket Provincial Statistics Office summarized Phuket’s success rate in the second War on Drugs – which ran from October 1 to December 3, 2003 – as follows: – Seven suspects died – 17 government officials were arrested – 299 suspected dealers were arrested – 9 million baht in assets were seized from 14 gangs and 17 individuals – 1,074 users began rehabilitation courses – 7,791 people vowed to be drug-free – 103 villages and 37 communities were declared “drug-free” Nationally, a record 39 million ya bah (methamphetamine) tablets and 3 billion baht in assets were seized. Despite these winning figures, Gov Udomsak announced that a third national War on Drugs would run from today, December 3, 2003 until September 30 next year.

Day of protests in King’s Cup

Paradorn to play at Laguna