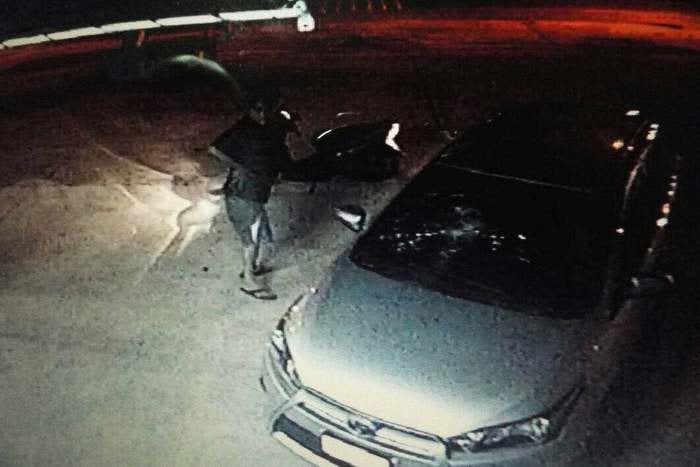 PHUKET: Police believe a man’s unrequited affection for a woman may have led him to break the windshield of her car in Phuket last night.

Matira Nantimaruj, 32, told Thalang Police that she discovered the damage to her Toyota Yaris when she went downstairs from her third floor apartment to investigate a loud noise.

“Upon receiving the call at about 10:40pm, we went to the scene and found Ms Matira and her boyfriend waiting for us by the car. Its windshield was badly damaged,” said Lt Suporn Muangkai of the Thalang Police.

“Near the vehicle, we found a stone which we believe was used in the crime.”

The image of the perpetrator was caught on the building’s CCTV.

“The footage shows a clear image of a man in a black t-shirt and shorts parking his black Yamaha Mio bike on the driver’s side of the vehicle and cracking the car’s windshield with a stone before hopping back on his bike and riding away,” said Lt Suporn.

Police questioned Ms Matira and were told that she did not have any disagreements or problems with anyone, and that she had no idea why this man would damage her car.

“We think this man may have taken a liking to Ms Matira and taken offense when she did not take any notice of him,” said Lt Suporn.

“However, we will continue to investigate the motive and try to track down the suspect.”