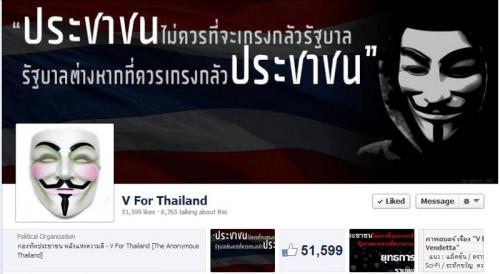 PHUKET: The anti-Pheu Thai “V for Thailand” group who have been using the Guy Fawkes white mask to obscure the identity of their supporters across the Kingdom plan to stage a protest in Phuket on Sunday.

The protest, slated for 5pm at the Milestone in Saphan Hin, is one of nine nationwide rallies the group has planned, extending from Chiang Mai in the north to Hat Yai in the south.

The new series of protests comes in the wake of Abhisit Vejjajiva, the leader of the opposition, demanding the government take the protesters seriously after about 700 people wearing the iconic masks protested last Sunday in Bangkok.

Protester leaders in Phuket were riled into action after Deputy Prime Minister Plodprasop Suraswadi made a thinly veiled threat against the island last Sunday.

“Phuket is next on the list for a convention hall [International Convention and Exhibition Center (ICEC)] after we finish the one here,” Deputy PM Plodprasop said in Chiang Mai.

“But I will not allow it to be built. We might build it if Phuket people vote for the Pheu Thai party, but if they don’t, that building project is not going anywhere,” he said (story here).

A member of the V for Thailand group who asked to remain anonymous spoke with the Phuket Gazette, “We will distribute information about which politicians we want to vote out of office and we will let everyone know that Plodprasop is not welcome in Phuket anymore.”

“If he wants to use our taxes to support people who vote for his party, I will not pay government taxes anymore,” he said.

The V for Thailand group has had their own Facebook page since December 2011. The slogan on their page reads “People should not fear the government, but the government should fear the people.”

Phuket MP Anchalee Vanich Thepabutra, who made a stand in Parliament over the cancellation of the 2.6-billion-baht ICEC project in Phuket on October 25 last year, has issued her own statement on Facebook in reaction to Deputy PM Plodprasop’s comments.

“Phuket province generates 188 billion baht a year, which is used to support all the people of Thailand.

“From now on, we don’t want the Pheu Thai government to use our taxes for their own people’s benefit anymore,” MP Anchalee wrote.