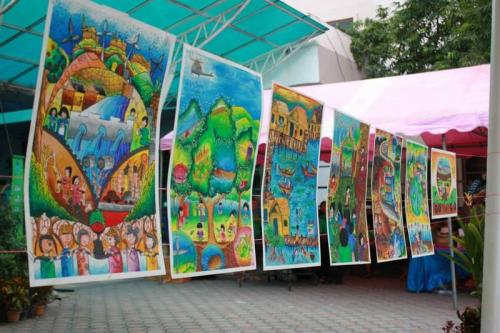 PHUKET: Taking part in a global initiative to increase awareness about environmental concerns, Phuket held an event in line with the theme of World Environment Day (WED) this year: Think. Eat. Save.

The event in Phuket was held at Vachira Phuket Hospital yesterday morning.

“The theme this year strives to encourage people to think about how to reduce the amount of food they throw away,” Siriporn Tonbooth of Regional Environmental Office – Phuket, told the Phuket Gazette.

The anti-food waste and food loss campaign encourages people to reduce their foodprint, explains the United Nations Environment Programme’s website. According to the United Nation Food and Agriculture Organization (FAO), every year 1.3 billion tonnes of food is wasted. This is equivalent to the same amount produced in the whole of sub-Saharan Africa. At the same time, one in every seven people in the world goes to bed hungry and more than 20,000 children under the age of five die daily from hunger

“Phuket is a province of consumption, which is natural as it is a well-known tourist destination,” Ms Siriporn said. “But we want to see more large organizations, such as hotels, factories and other big companies focus on using and producing products that have a low cost to the environment.”

The event on Wednesday also focused on making consumers more aware of the impact of their choices.

“Consumers should be buying local, organic goods and foods. By purchasing items that use less chemicals in their production and require less transportation to get them to the consumer, we are able to significantly limit our impact on the environment,” Ms Siriporn said.

Ms Siriporn made a plea for island residents to make an effort to sort their trash in order to slow the growing garbage disposal problem plaguing Phuket (story here).

“Phuket will have a healthy environment if everyone can think before they consume, and come together to save our island,” she concluded.