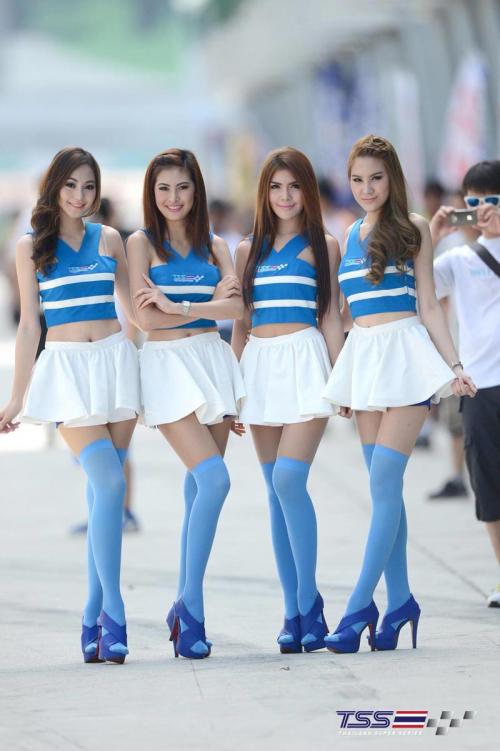 PHUKET: The new era of Thai motor sports is already a thriving reality as the drivers, teams, support personnel and racing cars have made their way back from Sepang, which hosted the first ever round of Thailand Super Series (TSS) from May 25-26. 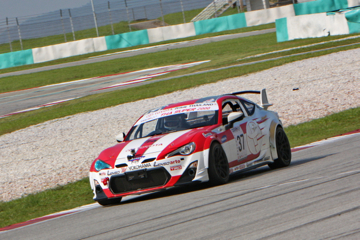 One new race car that unquestionably drew a lot of attention in the Super 2000 ranks during the Thailand Super Series season opener in Sepang, was the brand-new, factory-developed Toyota 86 of Manat Kulapalanont.
The Toyota Team Thailand-built car was fresh out of the box in Sepang, the Malaysian circuit’s practice sessions acted as its shakedown. It was a tough weekend, but Manat made the chequered flag in both races, meaning overall reliability was already in play.

“I [have] a problem because it’s the first car; the gears and the suspension [are] not right as well,” he noted, before adding, “I have too much over steer.” Manat is now looking forward positively. “I think [at the] next race at Bira I will be better for sure.”

Kiki, with the Bonk Motorsport crew, thrilled his army of Thai fans by bringing back a trophy from the Nürburgring in a truly stunning class win.

It was a win that Kiki and his hard battling teammates, Germans Andreas Möntmann Andreas and Jens Moetefindt, and former British Formula Renault champion, Adam Christodoulou, had to fight for on a track that is considered so dangerous that Formula 1 stopped using it nearly four decades ago. It was also the ultimate warm up for his return to Super Car. Kiki joined the Lamborghini ranks in TSS in a Gallardo GT3 having dropped down to Super 2000 for the last couple of seasons.

Kiki was soon being strapped into the cockpit of the Gallardo GT3 – ready for his first race in the Italian sports car and his first race at Sepang. In Race 1, he powered the Reiter Engineering-built Lamborghini to the podium at his first attempt – that made it two trips to the podium in consecutive weekends. 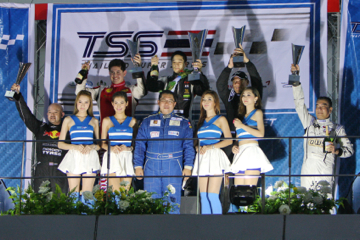 The ‘Lotus Cup Thailand’ made the 1,500 km trip to Malaysia for the Thailand Super Series opener; in fact the ‘One Make Race’ championship will be supporting all four rounds this year. Alongside the regular TSS machines from the Super Car, Super 2000, Super 1500 and Super Production categories. Nine examples of the Elise 1.6 made the journey to Sepang Circuit for the first round of the Lotus Cup Thailand 2013, which is organized by the official Lotus importer, Niche Cars.

A very comfortable double victory went to the OMP Vattana Motorsport-entry driven by Jack, who simply picked up where he had left off at the end of last year. In Race 1, he had 36.9 seconds in hand at the end of the 10 laps; in Race 2, he dropped 10 seconds during the first sector of the first lap and that left him ninth out of nine cars. However, it was all to easy work for ‘Super Jack’ to climb back through the field and he was out in front, with 17.1 seconds in hand, by the time the chequered flag waved.

A sign of the changing times in Thai racing is the arrival of a new-generation of sophisticated race cars, developed to exacting FIA regulations. Alongside these new machines, such as the Lamborghini’s Gallardo GT3 and Ferrari’s 458 GT3, comes an extensive support package in terms of spare parts, dedicated engineers, databanks and built-up knowledge. 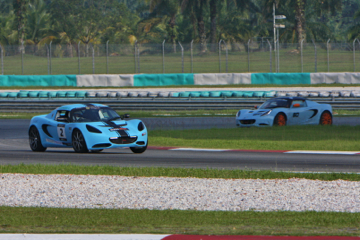 Almost all the front running TSS teams in Sepang boasted supporting engineers that know the cars inside out and thus have a head start in setting up these complex beasts, getting the drivers attuned to the individual attributes of their cars and quite simply extracting the maximum potential from the overall package in every area.

One brand name making its Thai racing debut in Sepang, and at the same time gaining a whole lot of public attention, was Aston Martin. The project was the hard work of Prantarit ‘Payu’ Nerngchamnong who wanted to put the English luxury sports car brand onto the Thai grid for the first time. This Prodrive-built racecar also came with full support.

Two factory engineers, led by Julian Clayton, Aston Martin GT4 Product Support Engineer, were sent over from the UK to oversee proceedings and develop an understanding of this program. Julian was quick to admit that they had started on the back foot in terms of the time frame and the main objectives would simply be to bed the project in and learn as much as possible.

“We’re using the weekend to find our feet and we’re certainly enjoying ourselves, we will take positives away from this and set the bar for the future.”

Attention will now turn to the second round at the long-time ‘home’ of Thai motorsports, Bira Circuit, on July 13-14.