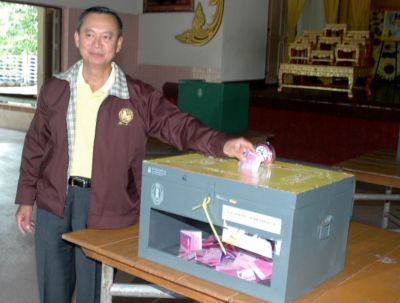 PHUKET: In yesterday’s national referendum of the draft constitution, Phuket residents overwhelmingly accepted the new charter with 88.9% of all those voting in favor compared to just 9.6% opposed.

The remaining ballots, just under 1.5%, were deemed as spoiled.

The official results were posted by the Phuket Election Commission (PEC) on a board outside the PEC counting center at Saphan Hin Gymnasium 3 about 7:30 pm last night.

Turnout for the referendum, the first of its kind in Thailand’s history, was slightly below the target figure 60%.

Some 57.6% of the island’s 215,433 registered voters found their way to the polls yesterday, despite heavy rains throughout much of the day and the fact that the island’s many entertainment establishments were operating as usual.

The results were hardly surprising after the Democrat Party, which has long held sway in Phuket and most other southern provinces, came out in favor of a “yes” vote in the run-up to the polling.

Opposition was highest in Isarn and the North, where voters in some provinces opposed the constitution by a wide margin.