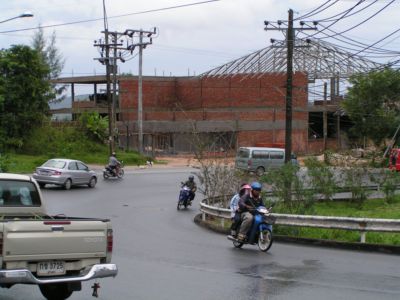 KATHU: A three-story building under construction on the eastern side of Patong Hill will become Phuket’s third shooting range, the Gazette has learned.

Honorary Secretary of the Trang Chamber of Commerce, K. Somchit is a shooting enthusiast who has represented Thailand in international competitions. He aims to help support recreational shooting in Phuket, and to become the new headquarters of the Phuket Shooting Association.

Construction at the conspicuous 4.5-rai hillside site next to the “Potable Water” station began in April and should be complete within a few months, K. Somchit said.

Although the venue is located in Tambon Kathu – not Patong – K. Somchit confirmed that the facility would definitely be named Patong Shooting Range.

The 45-million-baht price tag does not include the land purchase cost, which K. Somchit declined to divulge.

K. Somchit said that foreign tourists seeking “adventure activities” during their stays in Phuket would comprise a large part of his target market, which already has access to the Phuket Shooting Range in Chalong and the Kathu Shooting Range next to the Loch Palm golf course.

“We expect to open about mid-November, in time to host the southern regional competition for ‘sportsmen’ hoping to qualify for the next National Games,” said K. Somchit.

“Many foreign tourists coming to Phuket are interested in adventure sports such as diving and rock climbing. Having this shooting range will provide additional activities for them, so they might decided to stay in Phuket longer,” he suggested.