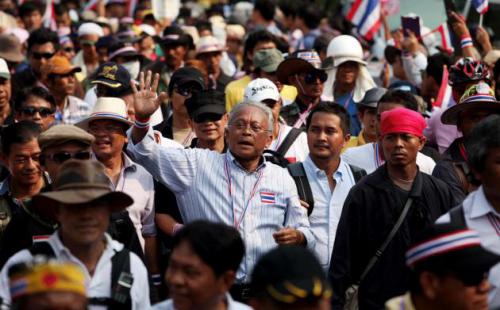 
People’s revolution declared
The Nation / Phuket Gazette
PHUKET: His Majesty the King endorses House dissolution decree, national election set for February 2; some academics agree with protesters, but urge both sides to talk and find a solution

Suthep Thaugsuban, leader of the anti-government protest, announced last night that the public would appoint a new prime minister and government, as well as a “people’s council” to act as the legislature following what he termed a “people’s revolution”.

He made this announcement outside Government House before a large crowd of protesters who had marched for hours from nine locations across the capital. Suthep, himself, had taken part in the 20-kilometre march from the Government Complex in Nonthaburi.

In the morning, Prime Minister Yingluck Shinawatra had dissolved the House of Representatives and called for a new general election. His Majesty the King endorsed the decree on House dissolution in the evening. The election date was later set for February 2.

Suthep, who is secretary-general of the People’s Democratic Reform Committee (PDRC), said in a live broadcast that the people had “recalled the power” from the government, which he described as corrupt, dishonest and unfaithful.

He pointed to acts by the government and the Pheu Thai-dominated lower house that resulted in a loss of trust. This included the bill that would give blanket amnesty to politicians sentenced in corruption cases and offenders of serious crimes during the recent political unrest.

Suthep said the people had the right to take back the government’s power, as the administration had abused its authority and violated the rule of law and good governance, hence the PDRC could invoke Article 3 of the Constitution. It states: “The sovereign power belongs to the Thai people. The King as head of state shall exercise such power through the National Assembly, the Council of Ministers and the Courts in accordance with the provisions of this Constitution.”

“We will work on change, reform and the happiness of people in the entire country, regardless of their political preferences. There will be fairness to everyone,” Suthep said.

He also summoned government officials to report to the PDRC and suggested that a “peacekeeping force of volunteers” be set up in every province, which he said would “serve as an important force” for protesters in their fight in the future.

Suthep also urged the demonstrators to continue with their push for political reform. “We have invested a lot together and we have to succeed, or we won’t return home,” he said.

Earlier in the day, in her nationally broadcast address, Yingluck said: “The government does not wish to see political conflict escalate into national division and violence. Returning power to the people by dissolving the House and calling a general election is a democratic and acceptable recourse. Let a majority of the people decide the direction and who they want to run the country.”

Pheu Thai Party resolved late yesterday to contest the next general election with Yingluck as its first party-list candidate to become the next PM.

Wirat Kalayasiri, who resigned on Sunday as opposition Democrat MP along with 151 other party MPs, said yesterday that dissolving the House was “not enough”. He called on the caretaker Cabinet to resign en masse, and the majority of the outgoing and incoming members of the five-person Election Commission to resign so that an election could not be held.

Wirat suggested that the Senate Speaker should nominate a neutral prime minister for royal endorsement. A new caretaker Cabinet should spend six months to one year amending necessary laws for reform and to make way for a new election.

He said the Democrat Party would convene later to come up with a joint proposal on this.

Pheu Thai secretary-general Phumtham Vechayachai yesterday said he saw no good reason why the Democrats should boycott the next general election. He said the prime minister had done her best in order to defuse a crisis – offering an apology and returning power to the people.

He challenged the protest leaders’ demand for Yingluck to resign as caretaker premier, as the Constitution states the PM has to continue with the caretaker role until the new election is held.

“House dissolution is the best the prime minister can do. We may be called the losers if you like, but we just want peace to be restored in the country. We are not afraid of losing. Winning or losing, let’s fight it out in the election,” Phumtham said.

Academics agreed they did not think that dissolving the House was a way out – though they also did not view the proposal for a people’s council and an unelected interim government as a solution either.

Jade Donavanik, of Siam University’s Faculty of Law, said that with a House dissolution failing to satisfy protesters, having an election when the conflict was still simmering would only bring more problems to the country. He suggested the government resign as caretaker administration and pave the way for a neutral Cabinet to take over. He also called on the protesters not to insist on their demand for a people’s council.

Kanit na Nakorn, chairman of the Committee for Legal Reform, said the prime minister’s decision to dissolve the House came too late. He noted that the current situation was similar to one after the student-led uprising in October 1973 that brought down a dictatorial government and forced government leaders to flee the country.

Assadang Panikabutr, former dean of Ramkhamhaeng University’s Faculty of Political Science, called on Yingluck and Suthep to have a dialogue in order to settle differences. He did not think House dissolution would solve the political stalemate but said the government had made its decision.

Prachak Kongkirati, a political scientist at Thammasat, said a House dissolution was the best option in the current situation to avoid bloodshed. He urged the Democrat Party to take part in the next election.

Academic Nidhi Eoseewong voiced opposition to the idea of having an unelected people’s council. He said people’s representatives must be elected. Nidhi said that after the House dissolution, political parties had to comply with the existing legal path by taking part in the next election.


Suthep pushes on
The Nation / Phuket Gazette
PHUKET: Prime Minister Yingluck Shinawatra’s decision to dissolve the House of Representatives yesterday failed to satisfy leaders of the anti-government protest, who insisted on her also stepping down as head of government.

Key protest leader Suthep Thaugsuban, speaking after leading a march to Government House, urged the demonstrators to continue with their push for political reform.

“We have invested a lot together and we have to succeed, or