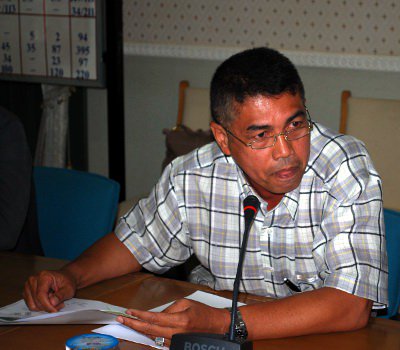 PHUKET: The village headman of Baan Kho En has called for officials to install more safety features at the notorious “death bend” on Thepkrasattri Road where the small community resides in the north of Phuket.

Somnuek Patee made his plea on Thursday at a high-powered meeting held to review the slew of safety measures put in place on the lethal stretch of road. The new safety features were installed after a four-year-old boy and his aunt were killed in an accident at the site in November.

Not shy of the top-level bureaucrats before him, village chief Somneuk said, “I would like to ask the Highways Department to install more warning signs. The flexible plastic traffic poles [installed between the southbound lanes to slow drivers down] are not helping, as people still drive through there at high speed.”

The plastic poles were installed just a week after the November 21 accident, which prompted a mass protest by villagers who commandeered and shut down the southbound lanes heading toward Phuket Town.

Also installed immediately after the accident were three speed bumps a few hundred meters before the curve.

“Sometimes when the cars following behind them – also travelling at high speed – can’t stop fast enough, so they hit the car in front,” he explained.

“So warning signs should be installed about 800 meters before the curve and the speed bumps should be made smaller. This will also help reduce the noise made by big trucks when they drive over them,” he added.

Highways Department Phuket Office deputy chief Pramote explained that his office had already installed concrete blocks along the left side of the left lane southbound to separate traffic heading toward Phuket Town from the slow-moving vehicles using the emergency shoulder along the curve.

“We have already installed concrete blocks along 310 meters of the road. We are now waiting to install the blocks along a further 90m around the curve,” Mr Pramote said.

“The delay is because we are waiting for delivery of the remaining blocks needed [to complete the job]” he added.

“We also want to install more plastic poles between the two southbound lanes so that they, too, separate the lanes for 400 meters,” he added.

Mr Pramote reiterated that his office had requested a budget of 7 million baht from the Ministry of Land Transportation to install more permanent safety features at the curve, including upgrading the road surface around the curve, installing brighter lights and installing a checkpoint a few hundred meters before the curve.

The new safety overhaul follows expenditure of 15 million baht on making the curve safer after another Baan Kho En villager was killed in the curve in 2006.

Flirting with the Blues