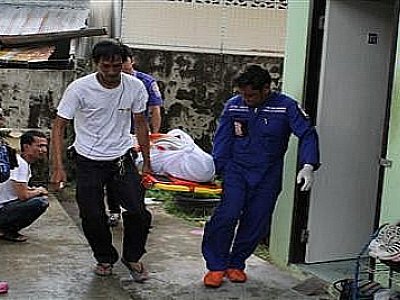 PHUKET: A heartbroken van driver took his own life by hanging in Phuket Town last night after his girlfriend of seven years refused his pleas to get back together.

Phuket City Police at 6:30am today received a report of a death by hanging at a rented room on Soi Saensuk, on the west side of town.

The man was later identified as 31-year-old Pornchai Chuaytan, a van driver listed as a resident of Krabi. He had a laceration to the palm of his right hand that was still bleeding when police arrived.

From the state of the body, police estimated that Mr Pornchai took his life at about 1am today.

A search of the room uncovered no signs of struggle or foul play.

Police questioned a woman who identified herself as Mr Pornchai’s sister-in-law.

“Last night, Mr Pornchai went to the Phuket Town apartment of his ex-girlfriend, who ended their relationship three weeks earlier. He knocked on the door’s glass window, asking her to open the door. When she refused he pounded harder and harder, until he broke the glass and cut his palm,” said the sister-in-law, who gave her name only as Ped (“Duck”).

She was unaware of any problems the late Mr Pornchai might have been suffering other than his distress at losing his former lover. He had tried to win her back ever since she ended the relationship, she said.

“I think this is probably what drove him to commit suicide,” she said.

A police search of his van found a farewell letter reading: “The reason I killed myself is because I was so madly disappointed in love. I made this decision by myself; no one forced me to do it”.

Police confirmed that the handwriting matched that of the deceased.

Kusoldharm Foundation rescue workers took the body to Vachaira Phuket Hospital for examination and storage until it can be claimed by relatives.